Recently, Vishay Intertechnology, Inc. (NYSE Code: VSH) announced the launch of a new thick film resistor that pass the AEC-Q200 Standard Certification. LTO150 are the extension of LTO series. The component is used in direct contact with heatsink. Fixation done by clip.The LTO 150 package is in  the clip-on TO247 , it can be directly mounted to the heat sink on. The LTO 150 have great value in automotive applications. The Vishay Sfernice LTO 150 delivers 150W of power dissipation at +45°C housing temperature with enhanced pulse handling.

Vishay's thick film power resistor _LTO 150 is more efficient for power dissipative than other devices that use the TO247 package, which greatly reduces the amount of cooling components used, which saves board space and simplifies layout. This shows that we will be able to achieve good cooling with less resistors and greatly reduce overall solution cost. What's more, LTO 150 is 30% more energy efficient than similar components which use the  package of TO247 .It indicates that LTO 150 will significantly reduce energy supply, greatly facilitating the full use of energy.  The launch of LTO 150(Thick film resistors) will greatly promote the development of electronics industry.

Where can be used the thick film power resistor LTO 150?

The LTO 150 can be used as an electric vehicle (EV) or hybrid electric vehicle as a pre-charge or discharge resistor for inverters, converters and car chargers. HEV) and plug-in hybrid electric vehicles (PHEV). It can also be used in general industrial and military power conversion applications. The device is RoHS compliant, has a non-inductive design, tolerances as low as ±1%, and performs exceptionally well in reliability testing (eg, more than 1000 temperature cycles).

What is the features of Vishay thick film resistor LTO 150 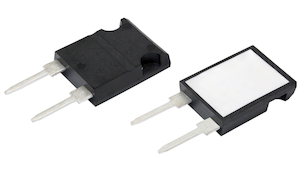 What is the Specifications of Vishay thick film resistor LTO 150


Where to find the LTO 150 datasheet

Jotrin Electronics provides you with the link address of LTO 150 datasheet and PDF, Source: Vishay.

The darling of international markets_2N3904