The AMD Radeon™ Pro V340 graphics card is a dual-GPU solution based on the advanced AMD “Vega” architecture1, optimized to deliver extreme performance and high user density for virtualized environments. It is the first VDI hardware solution equipped with 32GB of ultra-fast, second-generation high-bandwidth memory, providing massive amounts of memory and bandwidth for today’s most complex design and media workloads.

The Radeon Pro V340 features two Vega 56 flagship cores with a total of 7168 stream processors in 112 computing units, 32GB of HBM2 memory (16GB per GPU) and a bandwidth of 512GB/s.The AMD Radeon Pro V340 is AMD's current strongest single card, and AMD's CrossFire technology makes the two GPU cores more efficient. AMD Radeon Pro V340 is a professional data and virtualization market with up to 32 virtualized users, each with 1GB of video memory.

“The AMD Radeon™ Pro V340 graphics card will enable our customers to securely leverage desktop and application virtualization for the most graphically demanding applications,” said Sheldon D’Paiva, director of Product Marketing at VMware. 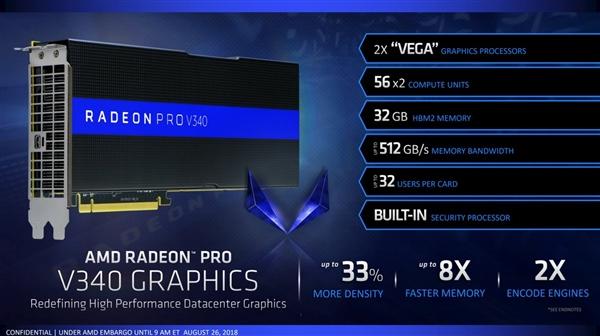 “With Radeon™ Pro for VMware, admins can easily set up a VDI environment, rapidly deploy virtual GPUs to existing virtual machines and enable hundreds of professionals with just a few mouse clicks.”“With increased density, faster frame buffer and enhanced security, the AMD Radeon™ Pro V340 graphics card delivers a powerful new choice for our customers to power their Citrix Workspace, even for the most demanding applications,” said Calvin Hsu, VP of Product Marketing at Citrix.


The Virtual Desktop Infrastructure (VDI) world that AMD’s new card is designed to drop into is about parallel performance, not fast-as-you-can frame rates. It’s aimed at accelerating CAD, design, and Desktop as a Service (DaaS) workloads, as well as rendering. AMD's virtualized MxGPU solution competes with Nvidia's GRID.

That's good news for folks who like using virtual services from the likes of Citrix, but it's not exactly music to the ears of gamers worshipping at the altar of AMD, especially in the face of new GeForce cards from Nvidia.

According to AMD, the Radeon Pro V340 graphics card should be available in Q4 of 2018. No price has been announced. But that may still be up in the air while AMD waits to see if Nvidia is going to stick with its Volta-based Tesla cards for now, or release a new generation of Turing-based parts to one-up AMD in the data center space.