Seoul Viosys is among the industry leaders in UV-LED technology. The company first partnered with US-based UV startup SETi and then acquired that company in 2016. The company has pushed the technology forward and aggressively protected its intellectual property rights.

Seoul Viosys points out that conventional UV LEDs have high manufacturing costs due to the additional components. The company also says that the overload of the heat emitted from each conventional UV LED degrades performance. On the other hand, UV WICOP boasts a low cost with the use of a single chip without additional components, and it is effective for heat dissipation.

Seoul has not revealed details of the UV WICOP components. Indeed, the announcement did not even detail the emission band. But Seoul did say the components had been tested in water and air purification as well as surface disinfection applications. That detail would imply that the offering will include the more difficult to manufacture UV-C LEDs that emit at wavelengths from 100–280 nm. Energy in that band can kill pathogens almost instantly.The patent award is USP 8,242,484. It covers vertical high-powered package technology based on UV WICOP. 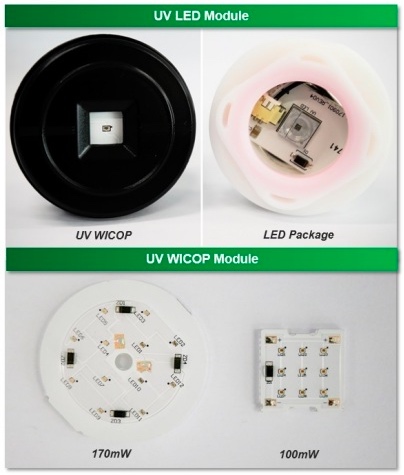 Chip-scale packaging can potentially reduce the manufacturing cost and improve the performance of ultraviolet LEDs, and Seoul Viosys says it has tested the technology in purification and sterilization applications.

Seoul Viosys says it applied the company’s UV WICOP technology to various applications for water and air purification, surface disinfection. According to the company, the new UV WICOP has improved performance by more than 600% with a projected lifetime of 45,000h compared to conventional high-powered LED packages that are expected to last between just 2,000h to 7,000h. Furthermore, Seoul Viosys says that the price of the UV WICOP is about 80% lower than its competitors that offer equivalent performance.

“Seoul Viosys had the patent for vertical, high-powered package (Patent no. USP 8,242,484) based on UV WICOP technology,” added Kim. “We will initiate the mass production for new UV WICOP with cost competitiveness in the near future.”

The company says that it can easily change the design depending on the application requirements or customer needs.

Seoul Semiconductor is one of the top three LED manufacturers in the world and the leader in the LED industry in Korea. Seoul Semiconductor is committed to supplying customers with innovative and reliable LED products such as SMD LEDs, through hole type LEDs, custom displays, and sensors.

Seoul Semiconductor started in 1992 with around 30 employees in a small space of a commercial building in Bongchen-dong, Seoul. They have grown exponentially over the years creating many success stories.

With a dream that they would make their LEDs lit up even a space station, they built their company Logo and CI(Corporate Identity) in 1994 and have invested in R&D for the last two decades. Consequently, they also invented the world’s first AC driven LED technology, “Acrich”, 10 times brighter LED “nPola” and package-free LED technology “WICOP”

With these technologies, not forgetting their original intention, they would like to build a clean, healthy and beautiful world! Moreover, they will do their best to meet stakeholders’ expectations and requirements with their products and service and will abide by national and international standardsSeoul Semiconductor develops and commercializes light emitting diodes (LEDs) for automotive, general illumination, specialty lighting, and backlighting markets.