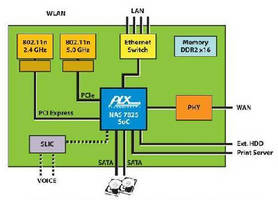 The new PLX® NAS 7800 family tackles two separate challenges in today's market. First, two of the SoCs -- the NAS 7820 and NAS 7821 -- bring to market the highest-performance solutions at the absolute lowest cost, making NAS more attractive in the home as a central, powerful storage platform. Second, the top-end NAS 7825 version enables higher levels of integration and functionality, thus supporting new markets for NAS, including routers/gateways, DVRs, and set-top boxes, each of which take advantage of PLX's unique hardware and software platform.

The NAS 7800 family's unmatched price-performance ratio is driven by its high level of integration, requiring very few additional components to build a system. No non-volatile memory is required on the board as the device can boot from the disk drive. The NAS 7800 system runs on highly optimized Linux-based software to maximize NAS transfers and leave a large percentage of the system resources for applications.

The PLX NAS 7800 family can centralize storage and manage the high-speed streaming of multiple digital mediums, such as high-definition video, high-resolution photos, audio and other digital content, thus simultaneously connecting multiple users and electronic devices within and beyond the home. Additionally, PLX developed new applications that integrate NAS into set-top boxes, DVRs, routers/gateways and other networked consumer electronics including the connectivity of multiple computers (desktops, laptops and netbooks), smart phones, digital photo frames, Internet radio and other various mediums.

Based on market research, PLX expects global consumer NAS unit sales to grow dramatically, from 2.5 million today to nearly 13 million units by 2012, with the total available market for silicon to exceed $100M. PLX NAS growth is driven by consumer demand for immediate and constant access to secure digital content from any device, at anytime and anywhere on the planet.

The flagship member of this new family, the NAS 7825, integrates dual ARM 11 processors, as well as a network co-processor, and is loaded with IO including dual RGMII, dual SATA, dual USB 2.0, and dual PCI Express 1.0 ports. The NAS 7825 solution is designed to support an expanded range of new NAS-related designs and market opportunities, including routers/gateways, DVRs, and set-top boxes. The dual RGMII ports are required in router applications, dual SATA ports to support multiple drives, and the dual PCI Express ports to allow the addition of other peripherals or functions such as Wi-Fi.

The NAS 7820 and NAS 7821 each incorporate the dual processors plus all the hardware and software acceleration modules of the Trident architecture, but with less IOs, which enables designers to match the functionality and price sensitivity of standard home consumer NAS applications.

"PLX's NAS 7800 family spearheads a new level of connectivity between consumer electronic devices," said Tom Coughlin, of Coughlin Associates and founder and chairman of the Storage Visions(TM) conferences. "The unified home storage architecture of tomorrow depends upon the use of products like this to enable sharing and organizing content, while maintaining security and privacy for consumers."

"With this new NAS 7800 SoC family, PLX is extending its commitment to provide high-quality, cost effective reliable silicon to the world's leading consumer storage ODMs and OEMs, but that's only half of the solution," said David Raun, vice president of marketing and business development at PLX. "All PLX storage devices are also backed by a comprehensive software/firmware package and an unmatched global technical support team that helps designers to differentiate their products and speed not just time to market but time to revenue. This combined silicon and software offering is a total solution and a fundamental value-added benefit of using PLX's world-renowned technology."

Pricing and Availability:
General sampling and Rapid Development Kits (RDKs) are available in Q1'10, followed by full production in Q2'10. Volume unit pricing is $15 for the NAS 7825, $13 for the NAS 7821 and $11 for the NAS 7820. Press Graphics A downloadable high-resolution press graphic can be found here.

PLX Leadership in Storage Technology
All PLX storage devices, including NAS and direct attached storage (DAS) solutions, are backed by the industry's most powerful and flexible software development environment, which supports rapid OEM customization resulting in easy-to-use products for end-users. PLX enables OEMs to deliver world-class solutions to consumers by supplying ready-to-go application firmware that has been extensively stress-tested by PLX and enables an application to be differentiated through desirable features and premium performance. PLX, with more than two decades of semiconductor-design expertise and through its acquisition of Oxford Semiconductor, is a leading supplier of consumer storage solutions and fully engaged with the world's market leaders.

About PLX
PLX Technology, Inc. (NASDAQ: PLXT), based in Sunnyvale, Calif., USA, is an industry-leading global provider of semiconductor-based connectivity solutions primarily targeting the enterprise and consumer markets. The Company provides manufacturers worldwide with innovative software-enriched silicon through feature differentiation, high-quality interoperability and superior performance. www.plxtech.com. PLX Technology and the PLX Technology logo are trademarks or registered trademarks of PLX Technology, Inc. All other product names that appear in this material are for identification purposes only and are acknowledged to be trademarks or registered trademarks of their respective companies. Other names and brands may be claimed as the property of others.

Next: Inexpensive system brings panel meters into the 21st century