Maxim Acquires Trinamic, Where is the Future of Motor Control Chip Companies ?

On May 11, Maxim Integrated completed the acquisition of Trinamic. It is said that Trinamic's focus will now remain on ensuring the continuity of the company's products and services as before. Moreover, Maxim does not intend to change its distribution and sales channels immediately, and Trinamic will continue to operate as-is for some time.

Maxim believes that the combination with Trinamic will make it easier to offer its customer's Industry 4.0 solutions with edge intelligence.

Trinamic is a company you may not be familiar with, but any engineer who works in motor control will have heard of it. It is a motion control company headquartered in Hamburg, Germany, with subsidiaries in Tallinn, Estonia, Shanghai and Chicago, Illinois, USA. They mainly provide motor control-related chips, modules, and all-in-one products. 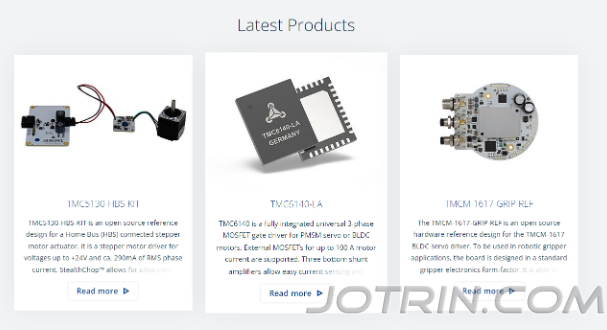 According to its official website, Trinamic develops the world's most advanced technology for the motor and motion control field. Using its integrated circuits, modules, and mechatronic systems, software engineers can quickly and reliably develop high-precision drive controllers that work efficiently, smoothly, and quietly.

The company began when founder and CEO Michael Randt teamed up with his colleagues Lars Larsson and Bernhard Dwersteg to develop motion control chips.

Back in 1996, they needed a reliable, smooth, and silent motor control solution. Still, there were no available hardware solutions on the market, so they used to do the same analog design repeatedly using FPGAs.

Later, with funding from the European Union, three of their colleagues founded Trinamic together, rented an old workstation and CAE software, and used it mostly at night. By constantly experimenting with FPGAs (field-programmable gate arrays), and digital and analog technologies, Trinamic created its first motion control chip.

"It was huge!" Michael Randt explains with a laugh, "We built it on a 4-inch wafer, measuring 60 square millimeters." By 2004, together with Lars Larsson and Bernhard Dwersteg, he had turned this prototype into a viable commercial motion control driver integrated circuit. Trinamic Motion Control was born.

Today Trinamic is a privately held company with more than 40 employees, and its products are used in applications such as 3D printing, smart home, lab automation, and medical.

They claim not to be a semiconductor manufacturer looking to sell more chips but only to design better actuator products.

Why was the motor chip maker acquired?

Trinamic, a company doing quite well for a few years, has been growing positively almost every year. So why would it still be acquired? Michael Rand emailed agents and distributors, "There is a high degree of alignment in our business model, management structure, and corporate values."

Industry insiders also believe that there is complementarity between Maxim and Trinamic, Maxim has efficient power analog devices, and Trinamic has excellent motion control products. The combination of the two can provide a complete Industry 4.0 solution.

Maxim also tried to do motor control products long ago, but it has never been able to do it; this acquisition can let Maxim realize its dream of the motor product line.

Of course, after the acquisition, Trinamic will gain a lot of benefits, such as direct access to Maxim's advanced semiconductor manufacturing process and sales channels. This will also allow Trinamic to do technology and product development with more peace of mind, without worrying about unsatisfactory product sales.

After all, before customers adopt a company's products on a large scale, it faces the need for continuous investment, but the output is a very low profitability dilemma. This period is also the most challenging time for companies.

For example, Active-Semi, another motor chip maker acquired by Qorvo at the end of last year, developed its motor chip product in 2012 but didn't start to generate business until 2015. But even if a significant customer adopted them, they could not avoid the fate of being sold after they were subjected to a massive order cut by a substantial customer last year.

This may have something to do with the characteristics of motor chip products, now shipments of large application market are generally highly competitive, such as power tools, sweepers, wind turbines, fascia guns, fans, and other applications, the beginning of the price can still be, as the product output rose, the cost of the program down.

And the price competition is not so fierce market? Shipments are correspondingly much less, loads are not large, the impact on the program may not be huge, and the prior shipments are still money to earn, but for chip manufacturers, it is not the same; after all, mass production of a chip of the preliminary expenditure is fixed, only shipments to a particular scale, chip manufacturers to earn money. Therefore, the chip makers prefer to find many loads in the market. And before finding this market, either the company has other income to subsidize this part of the loss, or investors can afford to lose money in the early stage.

There are some motor control chip companies began to integrate power devices into the control chip, and then, to ensure reliability and stability, but also to be able to increase some profits, some companies directly into the control module or all-in-one, including not only the power device but also the control algorithm, together with the sale. Perhaps this is a development direction of motor chip products, of course, even so, if only a single motor control product continues to develop or will encounter bottlenecks, just like Trinamic and Active-Semi, either merged into a larger group or diversified.