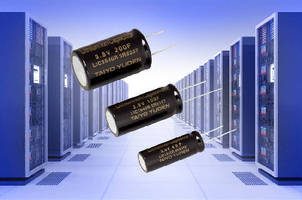 Taiyo Yuden’s hybrid LIC boasts the key features of batteries (high voltage and high energy) while maintaining the traditional characteristics of capacitors (rapid charge/discharge, high durability, safety and environmental friendliness). Unlike batteries, LICs have no risk of thermal runaway and have extremely low self discharge, even in high heat environments. These LICs are much more reliable than conventional EDLCs because of this hybrid feature.

These LICs provide an increased maximum rated voltage of 3.8V (about 1.5 times higher than the 2.3-2.7V of conventional capacitors), and offer 2 times the capacity of similar sized EDLCs - making their energy density up to 4 times higher than that of EDLCs. A higher energy density results in fewer components needed and reduced mounting space when compared to EDLCs. One LIC can replace multiple EDLCs, allowing for improved thermal design in tight spaces such as servers.

Taiyo Yuden’s breakthrough "Lithium Pre-Dope" technology is the key to this new device. Lithium pre-doping stores lithium ions at the negative electrode in advance, and enables energy to be used more efficiently and cycle life to be increased.

Applications:
Taiyo Yuden’s LIC is designed for use as a backup power source in servers and storage devices for integrated circuits, processors, memory and more which require a small footprint, long life and reliability in high temperature conditions. The LIC can also be used as the main power source for small appliances thanks to the LIC’s rapid discharge and low self discharge characteristics.