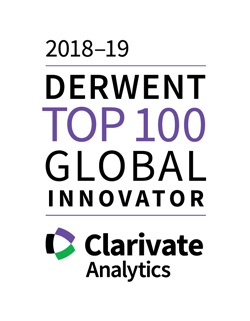 Hideo Tanimoto was named one of Devonte's top 100 global innovators in 2018-19 by philadelphia-based clarive Analytics, a global information solutions provider

Kyocera's Patent Application Success Rate and influence in the world are very outstanding, this is the fifth consecutive Kyocera obtained this recognition. The award was presented at the Kyocera headquarters in Kyoto, Japan.

Since 2011, Derwent's top 100 innovators awards have been given annually to leading companies and research institutions for their success in innovation. The winners were selected using clavivate's original method after an analysis of intellectual property (IP) and patents.

The candidates were assessed using four main criteria of patents and citation data: "Quantity" , "success" , "globalization" and "influence" , of which Kyocera's "success" and "globalization" earned it recognition from top innovators.

Kyocera is committed to innovation and has so far created more than 18,000 patents worldwide, with high respect for the intellectual property rights of other companies and institutions. The company has set up patent offices in Japan, the United States, China and Germany to maximize the development and protection of intellectual property in its four main business areas These include markets for information and communications, automobiles, the environment and energy, and health care In May 2018, Kyocera launched its intellectual property website to showcase its intellectual property and licensing program. The site details a variety of patented technologies developed over decades of research and development, including "V2X" (universal tools) solutions, a new silver alloy that, over time, retains the original Sheen of Silver Jewelry; And a new coating technology to extend the life of the artificial hip joint