Home > Technology List > Intel's XE graphics card may not be its own 10nm, but samsung's 5nm EU

Intel's XE graphics card may not be its own 10nm, but samsung's 5nm EUV

In the high-performance GPU market, NVIDIA and AMD are the most important players. They not only compete fiercely in the game card field, but also focus on the data center GPU market.Intel has also been eyeing the GPU market for a long time, and is hoping that both gaming and professional CARDS will blossom.For Intel's GPU plan, is still a storm in a teapot, Intel high-profile publicity but reveal too few details, performance, process, architecture are unknown.Intel previously said the XE GPU chip was made in its own 10nm process, but now that's in doubt, the XE core may also be made using samsung's 5nm EUV process. 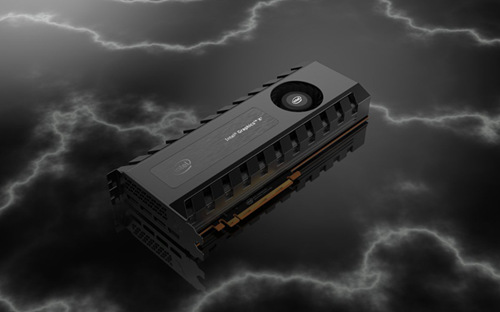 Will Intel be reduced to using samsung GPU chips?It sounds crazy, but it's possible.Just two days before samsung announced the 5nm EUV process, Raja Koudri, head of Intel's GPU business, tweeted a photo of himself being identified by a peep-eyed crowd at a samsung fabs factory in gyeonggi province.

What are executives from Intel's GPU division doing at samsung's fabs?Raja Koduri is unlikely to be a drop in for a chat, and is bound to have some conversations with samsung, so speculation about samsung making Intel's XE GPU chips grew after this photo was released.

Think carefully, samsung is likely to contract Intel GPU, Intel is a big reason why their technology progress, although in 2020, Intel said 10 nm process mass production, but even if the capacity is not an issue, 10, 2020 nm process compared with AMD, NVIDIA 7 nm process will be a little weak.

In addition, even if Intel according to data released their 10 nm process transistor density than samsung, 7 nm TSMC process, but don't forget to Intel's 10 nm process originally is also planning a 10 nm, 10 nm + at least two generations, and the performance of the original 10 nm process in fact is not as good as 14 nm + + + technology, used in the manufacture of GPU such big core is hard to say.

Even if their own 10nm process technology and production capacity are not a problem, but by the end of 2020, samsung and TSMC will be on the 5nm EUV process, theoretically Intel's 10nm process will be two generations behind, which is also an important impact, so it is possible for samsung to contract Intel GPU.

In addition, samsung may have a big customer on the GPU that has not been disclosed, and that is NVIDIA.From the previous statement, NVIDIA is not interested in the NVIDIA process. Therefore, we are not in a hurry to choose TSMC. Instead, TSMC hopes to place an order with NVIDIA.But some analysts have said NVIDIA is still waiting for samsung's EUV process, which could happen in 2020.

In this case, a very unique phenomenon is likely to appear in 2020, that is, Intel, NVIDIA gpus are samsung contract.