Inertial sensor systems, also commonly referred to as inertial measurement units (IMUs), are often embedded in machines to monitor motion and provide the information needed to resolve and respond to the external environment. IMUs use multi-axis accelerometers to detect linear motions such as acceleration, shock, tilt, and vibration. Some applications also require angular velocity measurement, so IMUs often include multi-axis gyroscopes.

Industrial environments are among the most challenging and demanding environments in which electrical and electronic equipment operate, often dirty, noisy (both acoustically and electrically), and subject to temperature, humidity, and vibration extremes.

Some of the most common applications for using inertial motion sensors in harsh environments today include:

Monitoring the performance of industrial machinery

What can gain much value by embedding sensors deep into machines to provide early and accurate detection of performance changes? For example, inertial sensors can detect changes in vibration frequency caused by bearing wear, allowing preventive maintenance to be performed before a total equipment failure occurs.

Vibration sense is becoming increasingly popular, as required by ISO standards. Today, most manufacturers of motors, pumps, conveyor systems, and even electric vehicles are concerned about performing maintenance updates at the right time, as repairing equipment too early or too late will hurt production.

The IIM-42352, for example, is a 3-axis accelerometer designed to help CBM manufacturers meet their needs for detecting vibration. The sensor's features include:

The 3-axis accelerometer can measure vibrations up to 4kHz and can withstand shocks up to 20,000g. Its external clock input also allows the sensor to be synchronized with the system's microcontroller, resulting in an ODR accuracy of 0.005%. This feature allows for a more stable and less noisy system. Finally, the WOM feature also provides excellent energy savings for customers using batteries as a power source. 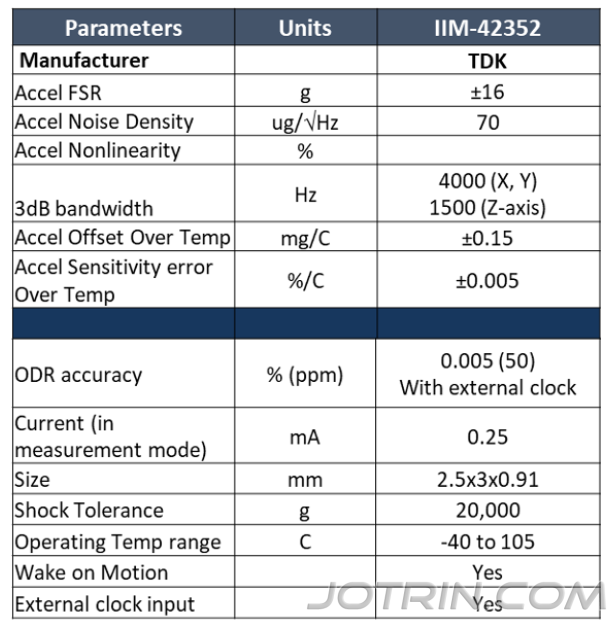 Figure: The detailed specifications above highlight the key performance of the 3-axis accelerometer.

Additional 6-axis IMU modules, such as the IIM-46234 and IIM-46230, contain ultra-low noise MEMS-based sensors that provide accurate inertial measurements even under harsh industrial conditions. These modules integrate the functionality of multiple gyroscopes and accelerometers in a single package and are ideal for applications such as high-end GNSS/INS modules used in autonomous applications. Some end users of these modules include smart agricultural equipment, last-mile delivery systems, and measurement equipment, among others, because they require best-in-class accuracy and performance.

The features of these IMU modules include:

They integrate SensorFT, TDK's proprietary fault-tolerance technology, which provides built-in redundancy and an early warning system. This means that these modules can tolerate one or more internal failures without going completely down. In addition, they provide continuous status changes regarding their performance levels, which helps to extend the overall lifetime and regular maintenance intervals of the final product.

The IIM-46234 module can provide high performance in precision applications. On the other hand, the IIM-46230 module can be supplied at a lower cost for applications that do not require the same level of accuracy but still require convenient, robust, and accurate inertial measurements.

The evaluation kit included with the IIM-46230 and IIM-46234 modules can easily be used to analyze these functions.

The IMU allows machines to detect acceleration, tilt, shock, vibration, and rotation, thus enabling the machine to sense and respond to the external environment. As the use of electronics in industrial applications increases, IMUs must withstand harsh environmental conditions while maintaining a high level of accuracy and performance.

Previous: WiFi 7 has Arrived with a Lightning-Fast Connection