How should sensors in the mainstream be selected

At the end of the 16th century, Galileo built a device that showed changes in temperature, using the principle of contraction of the air in the container, and observing the height of the water column to determine changes in temperature.The thermometer as we know it was invented by tricolor in 1612, but he only made a prototype.

Up to now, as the most common sensor in industry, Internet of things, medical and other industries, the development of temperature sensor can be said to be a hundred flowers bloom.According to the mode of action to be divided into contact type and non-contact type temperature sensor.Contact temperature sensors include bimetal thermometers, glass liquid thermometers, pressure thermometers, resistance thermometers, thermistors and thermocouples, etc.Non-contact basic is according to the basic theorem of blackbody radiation, and only this kind of sensor to measuring blackbody temperature is true, for the black body requires material surface emissivity correction, but the test precision of material surface emissivity is difficult to guarantee, because its emission rate is affected by temperature, wavelength, surface state, coating and other factors.

However, there are now four main types of temperature sensors: RTD, thermistors, thermocouples, and integrated circuit sensors with digital and analog interfaces.

The RTD temperature sensor is mainly made of metal and measures the temperature by changing the resistance of the sensor.Although the commonly used metals are copper, nickel and nickel alloys, platinum maintains its position as the international standard for temperature reference transmission by virtue of its excellent linearity, repeatability and stability.The resistance of RTD increases with the rise of temperature, but it is not strictly linear. According to the figure below, we can see that slight deviation will occur. In general, the resistance value can be digitized to find the correction factor. 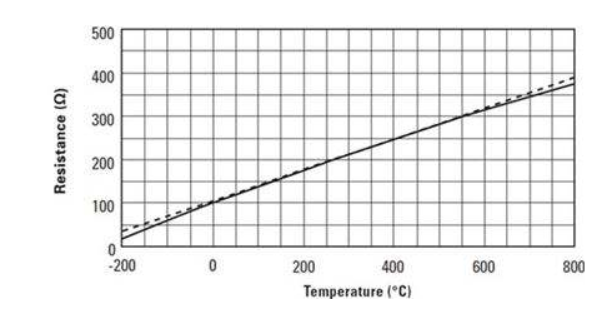 However, the disadvantages of RTD are also relatively obvious. Due to the need for constant voltage/current, the power generated during the electrification process will affect the measured temperature and affect the accuracy (further correction is required).In addition, during the output of RTD analog signal, the errors of the amplifier and ADC components themselves need to be taken into account.

Take NTC as an example. Although it is not linear, its linearity is an exponential function. The resistance value decreases with the increase of temperature.Due to its own material factors, its overall price is relatively more economic than platinum RTD. At the same time, the selection of materials is also relatively flexible, which can be processed into various shapes and miniaturized processing.In addition, because its resistance is extremely sensitive to temperature changes, its measurement accuracy is comparable to platinum RTD, ranging from 0.05 ℃ to 1.5℃.

Similarly, the measurement results of NTC also need to be corrected due to the influence of self-heating and ADC generated during the electrification process.Its applicable temperature range is also relatively harsh, generally around 0-150℃.It should be noted that NTC components are generally stable due to their vulnerability to aging.

Thermocouple sensor is a very common type of contact sensor, through two different conductor material at both ends of the junction to form a loop.When the temperature at the junction is different, the circuit produces an electromotive force, also known as a thermoelectric potential, which displays the temperature on the connected dial according to the size of the thermoelectric potential.

Due to the flexibility of materials used, thermocouple sensors have a wide range of temperature measurements, and the highest operating temperature can reach more than 2000℃. Besides, they are durable devices, which can be used in dangerous and harsh environments.At the same time, its inductive joints are directly exposed, so it is more responsive to temperature changes.In fact, we can see from the principle, thermocouple sensor does not need external power supply, so it is not easy to generate spontaneous heat.

Obviously, the thermocouple sensor in the accuracy and stability will be slightly inferior, its temperature measurement accuracy at 0.5-5.0℃, but due to exposure, corrosion resistance is weak, so the stability is not as good as RTD and thermistor.

The disadvantage is that its test temperature range is only -70~+150℃, and the temperature measurement accuracy is similar to that of thermocouple sensor, which is 0.5-5.0℃.

In the era when the Internet of things becomes the tuyere and sensor demand accelerates, temperature sensor will undoubtedly become one of the most important devices. How to choose the right temperature sensor needs to be considered from temperature range, precision, cost and other perspectives.