Electromagnetic interference can be classified as conducted (transmitted through the power supply) or radiated (transmitted through the air). ADI has implemented a technology to reduce both conducted and radiated interference: spread spectrum modulation (SSFM). This technique is used in several of our inductors- and capacitor-based switching power supplies, silicon oscillators, and LED drivers to spread the noise over a wider frequency band, thereby reducing peak and average noise at specific frequencies.

SSFM improves EMI by not allowing the emitted energy to stay in any receiver band for very long. The key determinants of effective SSFM are the amount of frequency expansion and modulation rate. For switcher applications, ±10% expansion is typical, and the modulation curve determines the optimal modulation rate. SFM uses various spread spectrum methods, such as modulating the clock frequency with a sine or triangle waveform. 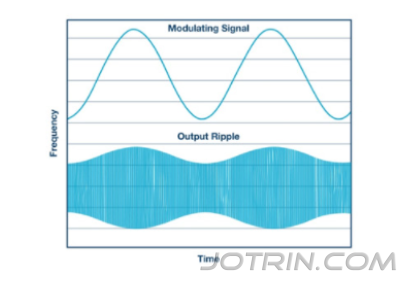 It may be difficult to filter out because the modulation frequency is much lower than the switcher's clock. This can lead to problems such as audible tones or visible display artifacts due to power supply noise coupling or limited power supply rejection in the downstream circuitry. Pseudo-random frequency modulation can avoid such periodic fluctuations. With pseudo-random frequency modulation, the clock transitions from one frequency to another in a pseudo-random manner. Since the output ripple of the switch is amplitude-modulated by a noise-like signal, the output appears as if it is not modulated, and the effect on the downstream system is negligible.

As the SSFM frequency range increases, the percentage of in-band time decreases. In Figure 2 below, note how the modulated frequency appears to peak 20 dB lower for a broadband signal compared to a single unmodulated narrowband signal. If the transmit signal enters the receiver's band infrequently over a short period (relative to its response time), this will significantly reduce EMI. for example, ±10% frequency modulation will be more effective in reducing EMI than ±2% frequency modulation. However, switching regulators can tolerate a limited range of frequencies. As a general rule, most switching regulators can easily withstand a ±10% frequency change. 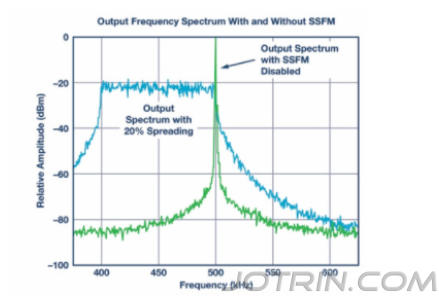 The typical method of measuring EMI is called peak detection, quasi-peak detection, or average detection. For these tests, the bandwidth of the test equipment is set appropriately to reflect the real-world bandwidth of interest and to determine the effectiveness of SSFM. When frequency modulation is performed, the detector responds as the emission sweeps across the detector band. When the detector's bandwidth is small compared to the modulation rate, the limited response time of the detector causes EMI measurement attenuation. In contrast, the detector's response time does not affect the fixed frequency emission, and no EMI attenuation is observed. Peak detection tests show that the improvement in SSFM corresponds directly to the amount of attenuation.

The quasi-peak detection test can show further EMI improvement because it includes the effect of the duty cycle. Specifically.

Many regulatory tests require systems to pass both quasi-peak and average detection tests. While fixed frequency emissions produce a 100% duty cycle, the duty cycle of SSFM decreases based on the amount of time the emission is in the detector's frequency band. Finally, the averaging test shows the most significant EMI improvement because it filters the peak detection signal through low, resulting in average in-band energy. Unlike fixed frequency emissions, where the average and peak energies are equal, SSFM attenuates the peak detection energy and the amount of in-band time, thus reducing the average detection result.

The peak emission of a switching regulator can be the same at any given moment, whether SSFM is enabled or not. How is this possible? The effectiveness of SSFM depends in part on the receiver's bandwidth. Receiving instantaneous snapshots of emissions requires unlimited bandwidth. Every real system has limited bandwidth. If the clock frequency changes faster than the receiver's bandwidth, the reduction in received interference will be significant. 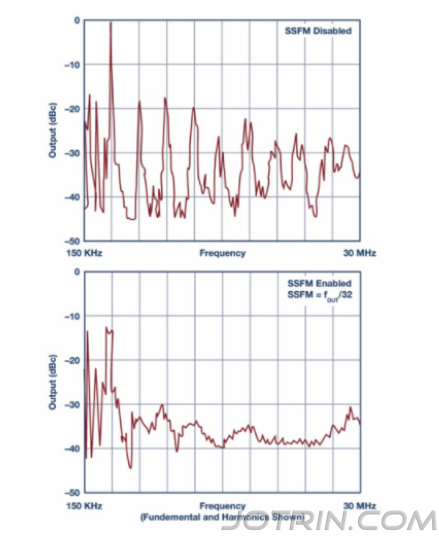 However, there is a limit to the hopping rate. If the frequency hopping rate exceeds the switching regulator's bandwidth, output spikes may appear at the edge of the clock frequency transition. Lower switcher bandwidths can result in more pronounced spikes. For this reason, the LTC6908 and LTC6909 include a proprietary tracking filter that smooths the transition from one frequency to the next (the LTC6902 uses an internal 25 kHz low-pass filter). The internal filter tracks frequency hopping to provide optimal smoothing for all frequencies and modulation rates.

This filtered modulated signal may be acceptable for many logic systems, but period-to-period jitter must be carefully considered. Even with a tracking filter, the bandwidth of a given regulator may still be insufficient to achieve high-frequency modulation. For bandwidth limitations, the LTC6908 /LTC6909 hopping rate can be reduced from the default rate of 1/16 of the nominal frequency to a rate of 1/32 or 1/64 of the nominal frequency.

To reduce switching noise, the LTM4608A can be enabled for spread-spectrum operation by connecting the CLKIN pin to SV IN (low power circuit supply voltage pin). In spread spectrum mode, the LTM4608A's internal oscillator is designed to generate a clock pulse whose period is random on a cycle-by-cycle basis but fixed between 70% and 130% of the nominal frequency. This facilitates spreading the switching noise over a frequency range, significantly reducing peak noise. If CLKIN is grounded or driven by an external frequency synchronization signal, the spread spectrum operation is disabled. Figure 5 shows the operating circuit to enable the spread-spectrum operation. A 0.01 µF capacitor must be placed between the PLL LPF pin and the ground to control the swing rate of the spread spectrum frequency change. The following equation determines the component value.

The LT8609 is a micropower, step-down converter that maintains high efficiency at high switching frequencies (93% at 2 MHz), allowing the use of smaller external components. SSFM mode operation is similar to pulse-hop mode operation, with the main difference being that a 3 kHz triangle wave modulates the switching frequency up and down. The switching frequency sets the modulation range at the low end (set by the resistor on the RT pin) and at the high end by a value approximately 20% higher than the frequency set by RT. To enable spread-spectrum mode, connect the SYNC pin to INTVCC or drive it to a voltage between 3.2 V and 5 V.

The LTC3251 / LTC3252 are 2.7 V to 5.5 V, single 500 mA / dual 250 mA charge pump-based step-down regulators that generate a clock pulse with a random period on a cycle-by-cycle basis but fixed at 1 MHz and 1.6 MHz. Figures 6 and 7 show how the LTC3251's spread spectrum feature significantly reduces peak harmonic noise and virtually eliminates harmonics compared to a conventional buck converter. Spread spectrum operation is selectable through the LTC3251 but is always enabled through the LTC3252. 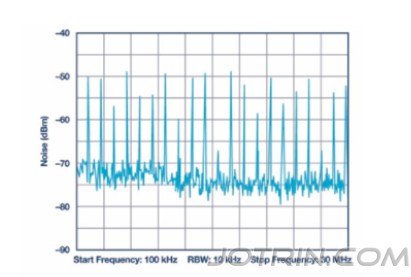 Switching regulator LED drivers is also troublesome for automotive and display lighting applications involving EMI. To improve EMI performance, the LT3795 110 V multi-topology LED driver controller includes SSFM. If a capacitor is present on the RAMP pin, a triangular waveform is generated that sweeps between 1 V and 2 V. This signal are then fed into the internal oscillator. This signal is fed into the internal oscillator to modulate the switching frequency between 70% of the fundamental frequency and the fundamental frequency set by the clock frequency setting resistor RT. The following equation sets the modulation frequency.

Using a rate of f SW /32, the pseudo-random value is updated in proportion to the oscillator frequency. This rate allows multiple passes through the entire frequency set within the standard EMI test dwell time. 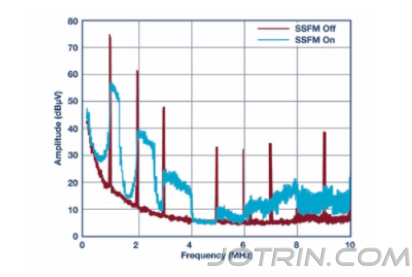 ADI has many other products that can be effectively designed to reduce EMI using design techniques. As mentioned earlier, the use of SSFM is one technique. Other methods include slowing down fast internal clock edges and internal filtering. Another new technique is achieved with Silent Switcher ® technology, which uses layout to reduce EMI effectively. The LT8640 is a unique 42V input, micropower, synchronous buck switching regulator that combines Silent Switcher technology with SSFM to reduce EMI... Hence, the next time EMI becomes an issue in your design, look for our low EMI products. Be sure to look for low EMI products to more easily comply with EMI standards.