Home > Other > Basic characteristics, principles and applications of RDA6216 power am

As we all know, the GSM system is currently the most widely used mobile communication standard in the world. With the introduction of the high-speed, high-reliability third-generation mobile communication system and gradually entering the commercial stage, the upgrade of the GSM system is imminent. As an upgraded version of the second-generation mobile communication system GSM, EDGE has its unique advantages. The EDGE system uses a linear 8-PSK modulation method, which can greatly increase the communication rate. At the same time, the EDGE system follows the GSM time division multiplexing architecture , Only need to upgrade a few components on the basis of the existing GSM system to realize the EDGE function, and the upgrade cost is very low.

As of the end of 2006, more than 200 operators in more than 100 countries around the world have publicly pledged to adopt EDGE technology, and they represent more than 1 billion mobile users. Among them, more than 100 operators have opened EDGE networks and services. Covering 60 regions around the world. EDGE has shown strong development strength. According to expert analysis, EDGE and GSM networks will have a symbiosis phenomenon for a long time. In order to adapt to such market development conditions, the majority of operators, terminal product providers and chip design companies have begun Research and launch products and solutions that can simultaneously support EDGE/GSM systems.

Although EDGE and GSM have a certain degree of homology in technology, EDGE is an evolution system of GSM after all. There are certain differences in the design of the core chip of handheld wireless communication products. This is especially manifested in the radio frequency module: due to EDGE It is a linear modulation system, and its transceiver module must also be a linear module. The power amplifiers in traditional GSM mobile phones are basically non-linear devices and cannot realize the EDGE function. Therefore, a new RF power amplifier module needs to be designed to support the EDGE system.

How can a high-efficiency and multi-band GSM/EDGE power amplifier module be realized?

RDA6216 is a four-band power amplifier module developed by RDA Microelectronics that supports both EDGE system and GSM system. The power amplifier and controller in this chip adopt high-stability InGap/GaAs HBT process and CMOS process respectively. The chip package is 6mm×6mm LGA. The RF input and output terminals are matched to 50 ohms. The Ramping control terminal integrates transient State spectrum filter, the chip peripheral circuit only needs one filter capacitor, which can simplify PCB design and reduce the space occupied by PCB.

Currently, EDGE power amplifiers on the market usually have two structures, one adopts the Polar-loop structure, and the other adopts the power back method. The first structure has higher power added efficiency, but requires power detection, and requires a complex feedback network to adjust the output phase and amplitude of the power amplifier, so the design is complicated, the cost is high, and the chip area is large. The second structure is simple to implement, low in cost, and small in chip area. The disadvantage is that the static current is large and the efficiency is low. 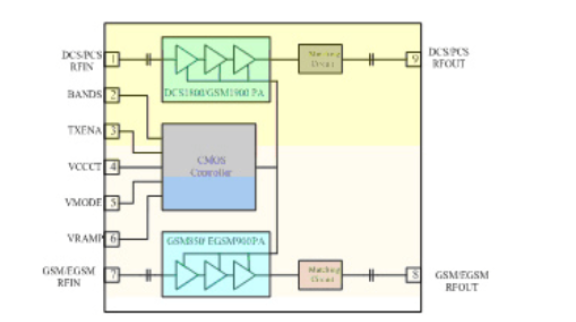 When VMODE is low, the power amplifier module is used to amplify the GSM signal. At this time, the output voltage of the CMOS controller is related to the VRAMP voltage, and the output power is related to the output voltage of the CMOS controller. Therefore, the output power can be adjusted by controlling the VRAMP terminal. the goal of. In the process of GSM switching, the base band can control the rising and falling speed of VRAMP, effectively reducing the switching spectrum brought by the switching moment. Similarly, you can select the GSM/EGSM frequency band and the DCS/PCS frequency band by selecting the BANDS pin, and then select TXENA to control the opening and closing of the corresponding frequency band power amplifier. 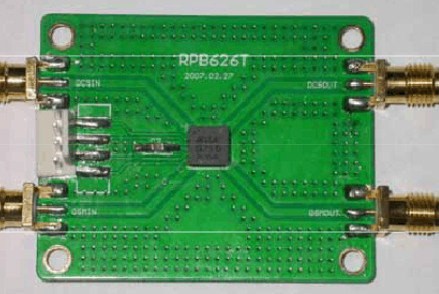 Figure 2. PCB board for demonstration of RDA6216

Because the RDA6216 peripheral circuit and control logic are very simple, and the RF input and output are matched at 50 ohms, it is easily compatible with most RF transceivers and baseband chips on the market.