In order to enable the MPEG video card to quickly transfer a large amount of data to the PC, we used USB2.0 technology when designing the interface between the MPEG video card and the PC. For the design and development of USB, we are based on the CY7C68013-100AC chip and its FX2 development kit of the EZ-USB FX2 series of CYPRESS.

The scheme of the improved USB2.0 interface is shown in Figure 1.

The working principle of the USB2.0 interface MPEG video card is: audio and video signals are A / D converted by the AK4550 audio processing chip and AA7113 video processing chip, and the analog signal is converted into an 8-bit PCM format digital signal, and the incoming SZ1510 audio The video compression acquisition chip performs processing, and converts the data in the coded and modulated PCM format into a mixed film and television file conforming to the format MPEG-1. Finally, the MPEG-1 data is sent to the PC via a USB interface chip for further processing, such as storage and display.

In the design, the USB interface chip we chose is the CY7C68013-100AC chip of the EZ-USB FX2 series. The chip is aimed at USB2.0 and is compatible with USB1.1. It supports two transfer rates: full speed (Full_speed) 12Mbps and high speed (High_speed) 480Mbps, it does not support Low speed (Low_speed) 1.5Mbps. The internal structure of the chip is shown in Figure 2.

CY7C68013-128AC integrates an enhanced 8051 core, which is compatible with the standard 8051 and has many improvements: the maximum operating frequency is 48MHZ, and only 4 clock cycles are required for one instruction cycle, which is an average increase of 2.5 times compared with the standard 8051 ; 2 UARTS ports; 3 timers / counters; extended interrupt system and more I / O ports. The USB2.0 SIE integrated inside CY7C68013-100AC can complete most of the USB2.0 protocol processing work, reducing the user's handling of complicated USB protocol. In addition, when developing, users can use GPIF and FIFO to realize the logical connection with high-speed peripheral devices and perform high-speed data transmission. In this improved solution, we chose the GPIF method to achieve communication with the Z1510. 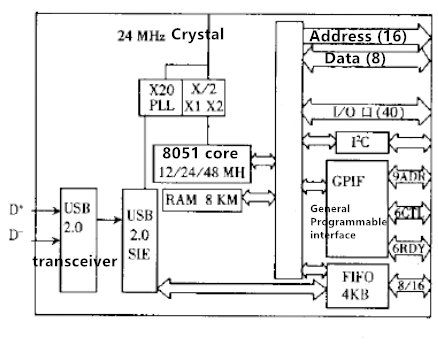 In the design, we considered that the MPEG video card requires fast and continuous transmission of a large amount of data, and the integrity of the data is not too high. We use the ISO transmission method. In addition, we let CY7C68013-100AC work in FIFO Read mode in GPIF mode, which can transmit up to 4G byte (WORDWIDE = 0) or word (WORDWIDE = 1). Since the peripheral data does not need to be processed by 8051, we adopt the method of automatic packing (AUTOIN = 1), directly from FIFO to SIE, which is conducive to improving the transmission rate.

To develop USB device drivers, Numega ’s Driver Works and Microsoft ’s 2000DDK can be used, and VC ++ 6.0 can be used as an auxiliary development environment. Driver Wizard provided by Driver Works can automatically generate a code framework according to the needs of users. Reduced the difficulty of development and shortened the development cycle.

In the EZ-USB FX2 development kit of CYPRESS, there is a universal driver program, which can be used directly after being compiled by the DDK without modification. In this design, due to time, we use this generic driver (GPD).

The USB host application is a program that performs specific functions in the computer. The key is to read or send a specific amount of data from a USB peripheral, a USB standard device request, and specific commands. In addition, the data can be further processed, such as: storage, display, fast Fourier transform, etc. Under WINDOWS 2000, the application development tool we use is VC ++ 6.0.

The card is an improvement on the traditional PCI interface MPEG video card, it supports hot swap and plug and play. Because of adopting USB2.0 interface, its transmission rate is also higher than the latter, which meets the requirements of high-speed data transmission and solves the transmission bottleneck existing in USB1.1. I believe that with the support of USB2.0 by major computer motherboard manufacturers, USB2.0 will be widely used in various fields of PC applications.