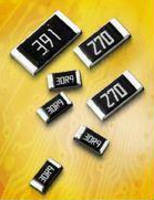 The Global passive component industry leader Yageo Corporation recently released its new "anti-sulfurated resistors" AF series. These are designed mainly for use in environments exposed to high levels of contamination, which could include industrial control systems, sensors, electric instrumentation, and communication base stations among others. This series is also suited for electronic appliances used in high concentrations of sulfur gases areas such as hot springs and mines. In comparison to Yageo's general thick film resistor RC series, the AF series is designed to satisfy the most demanding product applications with a high degree of reliability. Mass production of the AF series began this year and it is already approved and used by major telecommunication equipment makers in Japan and Taiwan. Yageo offers AF series resistors in full size range, 0402/0603/0805/1206, with high degree of anti-sulfurated capabilities. According to international norms ASTM test, Yageo's AF series meets the most stringent testing standards with excellent anti-sulfuration characteristics.

In general, sulfur penetrates into resistor through the gap between the termination and the protective layer, thus producing silver sulfide compounds with the silver used in the electrode. This renders the entire resistor into an insulator. To achieve anti-sulfuration capability, some in the industry are using gold as the inner electrode, but this tends to increase manufacturing cost, especially with the increasing price of gold, resulting in extra burden in customer costs.

Taking all factors into consideration, Yageo introduced the AF series resistors using other special material in the inner electrode with the alteration of the resistor structure to not only improve the anti-sulfuration capabilities but also to save costs. Yageo officials stated "as environmental pollution is a rising concern, there has been an increasing demand by terminal equipment manufacturers for anti-sulfuration features in the past two years. Yageo received a steady stream of customer inquiries, which led to more focus on anti-sulfurated resistor research and development. We were thus able to get the AF series up and ready before local competitors, providing our customers with alternative choices to Japanese manufacturers. We anticipate that customers using the AF series resistor will see even more optimal product performance and dependability that coincides with their demand for better end product design applications." In contrast to industrial electric instrumentation and base station equipment, most consumer electronic products don't have anti-sulfuration requirements. However, certain atmospheric conditions release substances causing sulfuration reaction which further affects the efficiency of electronic products. This makes it necessary for some electronic product manufacturers to use anti-sulfate resistors under extreme environmental condition.

Anti-sulfurated resistors currently only occupy a small proportion of the overall resistor market. Nevertheless, in order to satisfy both present and future customer demand, Yageo will continue to invest time and effort into research and development of anti-sulfuration technology, coming up with advanced products on the heels of its successful launch of the AF series.

Founded in 1977, Yageo Corporation has become a world-class provider of passive-component services with capabilities on a global scale, including production and sales facilities in Asia, Europe and Americas. The corporation is uniquely positioned to provide one-stop-shopping, offering its complete product portfolio of resistors, capacitors and inductors in both commodity and specialty versions, plus design-in capability, distribution, e-commerce connection and logistics. Yageo currently ranks as the world No.1 in chip-resistors, No. 3 in MLCCs and No. 3 in ferrite products. Yageo Corporation has 20 sales offices, 8 production sites, 6 JIT logistic outfits and 3 R&D centers.