On May 27th, the ComputexX trade show in Taipei added the first CEO keynote speech. The guest speaker this time was AMD CEO su zifeng. The main theme was the new generation of high-performance computing.Earlier this year at CES, AMD unveiled its first look at the group's older generation of processors, with just an 8-core, 16-thread version that was a bit more powerful than Intel's core i9-9900k, with significantly lower power consumption and superior energy efficiency.

Considering that Intel will also have a Comet Lake processor with 10 cores and 20 threads in the future, AMD can also launch 16 cores and 32 threads as soon as possible.In addition, AMD will also launch a new generation of 500 series chipsets in the same period. The X570 will be the new flagship, supporting PCIe 4.0, and the X570 will be ready by the end of this month. 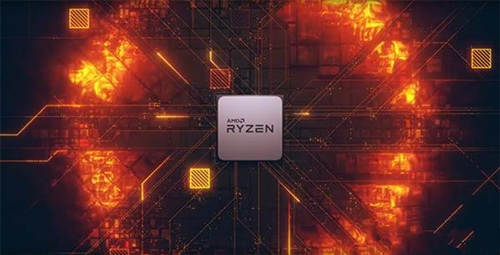 For 7 nm sharp dragon series 3000 processor, from CES, AMD is confident this time, the past can also use multi-core power tian racing strategy to contrast with Intel processors, this time the direct use of the same specification of 8 nuclear 16 threads processor directly Dui core i9-9900 k, in CINBENCH R15 run has a slight lead on the latter, platform only 133 w power consumption at the same time, the core i9 platform is 180 w - 9900 k, the difference of energy efficiency.

A while ago it was revealed that Intel will also launch Comet Lake processor, up to 10 core 20 threads, the core number of further increase, that AMD how to deal with it?As recently revealed on the Italian website bitchips, AMD actually has a 16-core, 32-thread AM4 processor in place, which means that it can actually do 16 cores as previously suspected.

In addition, they also revealed that AMD's X570 platform will be ready by the end of this month, is still in debugging.

Previously, the X570 chipset was designed by AMD itself, because the PCIe 4.0 technology has not been worked out by its partner xiangshuo. It will replace the X470 as the flagship of AMD's new motherboard platform, while the B550 and other mainstream chipsets will be manufactured by xiangshuo.

There have also been a number of Revelations about the X570 motherboard, which asus will be rolling out, including the ROG Crosshair VIII, ROG Strix, Prime, Pro WS and TUF Gaming.The details are as follows:

The X570 chipset motherboard from microstar, giga and as& co has also been exposed. Generally speaking, these manufacturers' positioning of the X570 motherboard is improving, and it has been used in their top product line. This also proves from the side that AMD's battle capability of the 2017 arron 3000 series processor will be very good, and manufacturers can treat it as a flagship product.