The TMS320VC5509AGHH fixed-point digital signal processor (DSP) is based on the TMS320C55x DSP generation CPU processor core. The C55x DSP architecture achieves high performance and low power through increased parallelism and total focus on reduction in power dissipation. The CPU supports an internal bus structure that is composed of one program bus, three data read buses, two data write buses, and additional buses dedicated to peripheral and DMA activity. These buses provide the ability to perform up to three data reads and two data writes in a single cycle. In parallel, the DMA controller can perform up to two data transfers per cycle independent of the CPU activity.

The C55x CPU provides two multiply-accumulate (MAC) units, each capable of 17-bit × 17-bit multiplication in a single cycle. A central 40-bit arithmetic/logic unit (ALU) is supported by an additional 16-bit ALU. Use of the ALUs is under instruction set control, providing the ability to optimize parallel activity and power consumption. These resources are managed in the Address Unit (AU) and Data Unit (DU) of the C55x CPU.

The general-purpose input and output functions and the 10-bit A/D provide sufficient pins for status, interrupts, and bit I/O for LCDs, keyboards, and media interfaces. The parallel interface operates in two modes, either as a slave to a microcontroller using the HPI port or as a parallel media interface using the asynchronous EMIF. Serial media is supported through two MultiMedia Card/Secure Digital (MMC/SD) peripherals and three McBSPs.

The 5509A peripheral set includes an external memory interface (EMIF) that provides glueless access to asynchronous memories like EPROM and SRAM, as well as to high-speed, high-density memories such as synchronous DRAM. Additional peripherals include Universal Serial Bus (USB), real-time clock, watchdog timer, and I2C multi-master and slave interface. Three full-duplex multichannel buffered serial ports (McBSPs) provide glueless interface to a variety of industry-standard serial devices, and multichannel communication with up to 128 separately enabled channels. The enhanced host-port interface (HPI) is a 16-bit parallel interface used to provide host processor access to 32K bytes of internal memory on the 5509A. The HPI can be configured in either multiplexed or non-multiplexed mode to provide glueless interface to a wide variety of host processors. The DMA controller provides data movement for six independent channel contexts without CPU intervention, providing DMA throughput of up to two 16-bit words per cycle. Two general-purpose timers, up to eight dedicated general-purpose I/O (GPIO) pins, and digital phase-locked loop (DPLL) clock generation are also included.

The TMS320C55x DSP core was created with an open architecture that allows the addition of application-specific hardware to boost performance on specific algorithms. The hardware extensions on the 5509A strike the perfect balance of fixed function performance with programmable flexibility, while achieving low-power consumption, and cost that traditionally has been difficult to find in the video-processor market. The extensions allow the 5509A to deliver exceptional video codec performance with more than half its bandwidth available for performing additional functions such as color space conversion, user-interface operations, security, TCP/IP, voice recognition, and text-to-speech conversion. As a result, a single 5509A DSP can power most portable digital video applications with processing headroom to spare. For more information, see the TMS320C55x Hardware Extensions for Image/Video Applications Programmer‘s Reference (literature number SPRU098). For more information on using the the DSP Image Processing Library, see the TMS320C55x Image/Video Processing Library Programmer‘s Reference (literature number SPRU037). 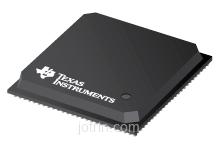 Q: How does Jotrin guarantee that TMS320VC5509AGHH is the original manufacturer or agent of TI?
We have a professional business development department to strictly test and verify the qualifications of TI original manufacturers and agents. All TI suppliers must pass the qualification review before they can publish their TMS320VC5509AGHH devices; we pay more attention to the channels and quality of TMS320VC5509AGHH products than any other customer. We strictly implement supplier audits, so you can purchase with confidence.
Q: How to find the detailed information of TMS320VC5509AGHH chips? Including TI original factory information, Digital Signal Processors & Controllers (DSP, DSC) application, TMS320VC5509AGHH pictures?
You can use Jotrin's intelligent search engine, or filter by Processors ; Digital signal processors (DSP) ; C5000 low-power DSP category, or find it through TI brand manufacturer page.
Q: Are the TI's TMS320VC5509AGHH price and stock displayed on the platform accurate?
The TI's inventory fluctuates greatly and cannot be updated in time, it will be updated periodically within 24 hours. After submitting an order for TMS320VC5509AGHH, it is recommended to confirm the order with Jotrin salesperson or online customer service before payment.
Q: Can I place an order offline?
Yes. We accept offline orders.
We can provide order placement service. You only need to log in, click "My Orders" to enter the transaction management, and you will see the "Order Details" interface. After checking it, select all and click "Place Order". In addition, you can enjoy coupons or other selected gifts when placing orders online.
Q: What forms of payment can I use in Jotrin?
TT Bank, Paypal, Credit Card, Western Union, and Escrow is all acceptable.
Q: How is the shipping arranged and track my package?
Customers can choose industry-leading freight companies, including DHL, FedEx, UPS, TNT, and Registered Mail.
Once your order has been processed for shipment, our sales will send you an e-mail advising you of the shipping status and tracking number.
Note: It may take up to 24 hours before carriers will display tracking information. In normal conditions, Express delivery needs 3-5 days, Registered Mail needs 25-60 days.
Q: What is the process for returns or replacement of TMS320VC5509AGHH?
All goods will implement Pre-Shipment Inspection (PSI), selected at random from all batches of your order to do a systematic inspection before arranging the shipment. If there is something wrong with the TMS320VC5509AGHH we delivered, we will accept the replacement or return of the TMS320VC5509AGHH only when all of the below conditions are fulfilled:
(1)Such as a deficiency in quantity, delivery of wrong items, and apparent external defects (breakage and rust, etc.), and we acknowledge such problems.
(2)We are informed of the defect described above within 90 days after the delivery of TMS320VC5509AGHH.
(3)The TMS320VC5509AGHH is unused and only in the original unpacked packaging.
Two processes to return the products:
(1)Inform us within 90 days
(2)Obtain Requesting Return Authorizations
More details about return electronic components please see our Return & Change Policy.
Q: How to contact us and get support, such as TMS320VC5509AGHH datasheet pdf, TMS320VC5509A pin diagram?
Need any After-Sales service, please feel free contact us: sales@jotrin.com