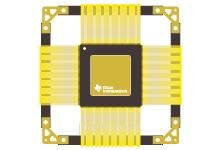 The SM320C6727BGDHMEP is the next generation of Texas Instruments’ C67x generation of high-performance 32-/64-bit floating-point digital signal processors.

Efficient Memory System. The memory controller maps the large on-chip 256K-byte RAM and 384K-byte ROM as unified program/data memory. Development is simplified since there is no fixed division between program and data memory size as on some other devices.

The memory controller supports single-cycle data accesses from the C67x+ CPU to the RAM and ROM. Up to three parallel accesses to the internal RAM and ROM from three of the following four sources are supported:

The large (32K-byte) program cache translates to a high hit rate for most applications. This prevents most program/data access conflicts to the on-chip memory. It also enables effective program execution from an off-chip memory such as an SDRAM.

High-Performance Crossbar Switch. A high-performance crossbar switch acts as a central hub between the different bus masters (CPU, dMAX, UHPI) and different targets (peripherals and memory). The crossbar is partially connected; some connections are not supported (for example, UHPI-to-peripheral connections).

Multiple transfers occur in parallel through the crossbar as long as there is no conflict between bus masters for a particular target. When a conflict does occur, the arbitration is a simple and deterministic fixed-priority scheme.

The dMAX is given highest-priority since it is responsible for the most time-critical I/O transfers, followed next by the UHPI, and finally by the CPU.

The dMAX controller includes features such as the capability to perform three-dimensional data transfers for advanced data sorting, and the capability to manage a section of the memory as a circular buffer/FIFO with delay-tap based reading and writing of data. The dMAX controller is capable of concurrently processing two transfer requests (provided that they are to/from different source/destinations).

External Memory Interface (EMIF) for Flexibility and Expansion. The external memory interface on the C6727B supports a single bank of SDRAM and a single bank of asynchronous memory. The EMIF data width is 16 bits wide.

Asynchronous memory support is typically used to boot from a parallel non-multiplexed NOR flash device that can be 8, 16, or 32 bits wide. Booting from larger flash devices than are natively supported by the dedicated EMIF address lines is accomplished by using general-purpose I/O pins for upper address lines.

The asynchronous memory interface can also be configured to support 8- or 16-bit-wide NAND flash. It includes a hardware ECC calculation (for single-bit errors) that can operate on blocks of data up to 512 bytes.

The UHPI can also be restricted to accessing a single page (64K bytes) of memory anywhere in the address space of the C6727B; this page can be changed, but only by the C6727B CPU. This feature allows the UHPI to be used for high-speed data transfers even in systems where security is an important requirement.

Multichannel Audio Serial Ports (McASP0, McASP1, and McASP2) - Up to 16 Stereo Channels I2S. The multichannel audio serial port (McASP) seamlessly interfaces to CODECs, DACs, ADCs, and other devices. It supports the ubiquitous IIS format as well as many variations of this format, including time division multiplex (TDM) formats with up to 32 time slots.

Each McASP includes a transmit and receive section which may operate independently or synchronously; furthermore, each section includes its own flexible clock generator and extensive error-checking logic.

The McASP is a configurable module and supports between 2 and 16 serial data pins. It also has the option of supporting a Digital Interface Transmitter (DIT) mode with a full 384 bits of channel status and user data memory.

Inter-Integrated Circuit Serial Ports (I2C0, I2C1). The C6727B includes two inter-integrated circuit (I2C) serial ports. A typical application is to configure one I2C serial port as a slave to an external user-interface microcontroller. The other I2C serial port may then be used by the C6727B DSP to control external peripheral devices, such as a CODEC or network controller, which are functionally peripherals of the DSP device.

The two I2C serial ports are pin-multiplexed with the SPI0 serial port.

Serial Peripheral Interface Ports (SPI0, SPI1). As in the case of the I2C serial ports, the C6727B DSP also includes two serial peripheral interface (SPI) serial ports. This allows one SPI port to be configured as a slave to control the DSP while the other SPI serial port is used by the DSP to control external peripherals.

The SPI ports support a basic 3-pin mode as well as optional 4- and 5-pin modes. The optional pins include a slave chip-select pin and an enable pin which implements handshaking automatically in hardware for maximum SPI throughput.

Clock Generation (PLL and OSC). The C6727B DSP includes an on-chip oscillator that supports crystals in the range of 12 MHz to 25 MHz. Alternatively, the clock can be provided externally through the CLKIN pin.

The DSP includes a flexible, software-programmable phase-locked loop (PLL) clock generator. Three different clock domains (SYSCLK1, SYSCLK2, and SYSCLK3) are generated by dividing down the PLL output. SYSCLK1 is the clock used by the CPU, memory controller, and memories. SYSCLK2 is used by the peripheral subsystem and dMAX. SYSCLK3 is used exclusively for the EMIF.

Q: What are the advantages of buying from Jotrin?
Jotrin is your second procurement department of the electronic components. The platform has supported by over 1000 original factories and authorized agents, over 10 years of experience in the electronic components area. Jotrin is aiming to help these manufacturers, EMS, PCBA clients offer a whole BOM solution with the assistant of their professional BOM team and Intelligent BOM software. We can help you:
1. Do the cost down for your current regular orders.
2. Decrease your suppliers' management costs and suppliers' qty.
3. Improve your efficiency, we can offer the whole BOM one-stop supply chain service.

Q: How can Jotrin guarantee to be the original manufacturers or the agents?
We have a professional business development department to strictly examine and verify the qualifications of the original manufacturers and the agents. All the suppliers must pass the qualification examination before putting their materials on the shelves; We pay more attention to the channel and quality of products than any other customers, we are strict with supplier audit, you can rest assured that choice.
Q: What are the business hours of Jotrin?
Although we accept quotation requests and orders anytime 24 hours a day regardless of business days and hours, we provide quotations and process orders during business time.
Business Hours: Monday - Friday 9:00am - 9:00pm (GMT+8)
Q: Is the inventory and price seen on the platform accurate?
Inventory fluidity big, unable to update in time, it will be updated periodically within 24 hours. After placing the order, it is suggested to confirm the order with the supplier or the online customer service of Jotrin before paying.
Q: Can I place an order offline?
Yes. We accept offline orders.
You can contact our customer service representatives to help you customize your requirements.
If you'd like to submit your purchase orders via email, please send us a note to sales@jotrin.com. One of our customer service representatives will help you.

Q: What forms of payment can I use in Jotrin?
TT Bank, Western Union, Paypal, and Escrow is all acceptable.
Q: How is the shipping arranged?
Customers can choose industry-leading freight companies, including DHL, FedEx, UPS, TNT, and Registered Mail. No shipment handling charges be included.
Q: How can I track my package?
Once your order has been processed for shipment, our sales will send you an e-mail advising you of the shipping status of your order and its tracking number, if applicable. When the tracking numbers are present, you can click on the link and it will take you directly to the carriers' website so that you can track your order. Note: It may take up to 24 hours before carriers will display tracking information.
Q: When can I receive my package？
In normal conditions, Express delivery needs 3-5 days, Registered Mail needs 25-60 days.
Q: What is the process for returns or replacement?
All goods will implement Pre-Shipment Inspection (PSI), selected at random from all batches of your order to do a systematic inspection before arranging the shipment. If there is something wrong with the product we delivered, we will accept the replacement or return of the product only when all of the below conditions are fulfilled: (1)There are any problems with the product we delivered, such as a deficiency in quantity, delivery of wrong items, and apparent external defects (breakage and rust, etc.), and we acknowledge such problems.
(2)We are informed of the defect described above within 90 days after the delivery of the product.
(3)The product is unused and only in the original unpacked packaging.
Two processes to return the products:
(1)Inform us within 90 days
(2)Obtain Requesting Return Authorizations
More details about return electronic components please see our Return & Change Policy
Q: How to contact us and get support?
Need any After-Sales service, please feel free contact us: sales@jotrin.com