The S19225PBI21 is a highly-integrated device that allows mapping GbE or SAN (Storage Area Network) protocol-clients into a STS-192/STM-64 or four STS-48/STM-16 SONET/ SDH signals. It implements two major encapsulation mechanisms to multiplex up to 10 client signals into SONET/SDH frames, each client port being mapped in a dedicated tributary or Virtual Concatenation Group.

The first mode implements the transparent Generic Framing Procedure (GFP) per ITU.T G.7041 and allows transporting 8B/10B coded-client protocol over a SONET/SDH transport system. Frame-based Ethernet is the second mode that allows mapping Ethernet frames into SONET/SDH tributaries using HDLC, ITU-T X.86 or frame-based GFP. Any client port can be provisioned for either of these two modes at any time.

The transparent GFP mode emulates a virtual-wire service. All 8B/10B coding information is recoded, transported over the SONET/SDH infrastructure and restored at the destination point. Protocols supported in this mode are ESCON, DVB-ASI, x1 and x2 Fibre Channel, FICON, and Gigabit Ethernet.

In frame-based Ethernet mode, either the full bandwidth or only a fraction of the GbE can be provisioned for transport. The latter option, also known as Fractional Ethernet, allows the oversubscription of SONET/SDH tributaries. End users operate their Gigabit Ethernet ports at their native line-rate and adjust the Wide Area Network (WAN) bandwidth to their actual data bandwidth needs. Volta supports a rate-limiting algorithm that, combined with IEEE 802.3x flow control of remote GbE clients and deep ingress FIFO buffers, ensures that no client data will be lost.

The use of virtually-concatenated tributaries within an STS192/STM-64 or four STS-48/STM-16 signals allows the payload of SONET/SDH tributaries to be sized to the required client bandwidth and result in optimized usage of the SONET/SDH resources. The bandwidth of the client ports are provisioned and monitored to correctly fill the virtual concatenated paths. Properly-sized, virtual-concatenated paths can be provisioned for GbE fibre-channel, FICON, ESCON and DVB-ASI (Digital Video Broadcast - Asynchronous Serial Interface) as shown in Table 1. 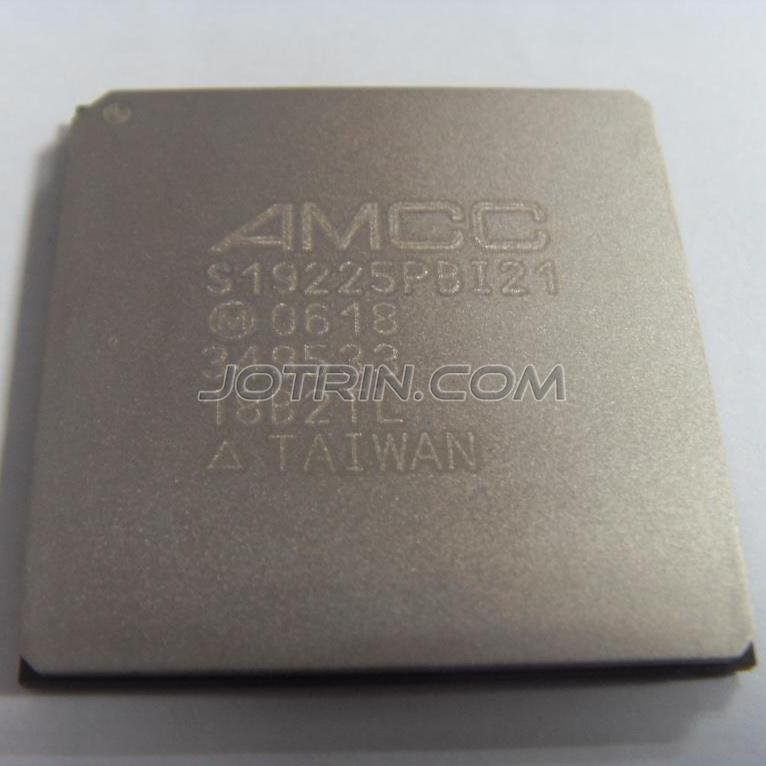 Combined with other AMCC products, Volta can be used in multiple applications in edge, access, and metropolitan networks to map and transport Gigabit Ethernet and SAN protocols, such as Fibre Channel and ESCON over
SONET/SDH networks.
The primary applications include:
• Multi-Service Provisioning Platforms and Metro Access platforms built around a SONET/SDH STS/VC crossconnect.
• Metro DWDM systems, where Volta can be used in transponder cards or tributary cards

Q: How does Jotrin guarantee that S19225PBI21 is the original manufacturer or agent of AMCC?
We have a professional business development department to strictly test and verify the qualifications of AMCC original manufacturers and agents. All AMCC suppliers must pass the qualification review before they can publish their S19225PBI21 devices; we pay more attention to the channels and quality of S19225PBI21 products than any other customer. We strictly implement supplier audits, so you can purchase with confidence.
Q: How to find the detailed information of S19225PBI21 chips? Including AMCC original factory information, VOLTA 192 application, S19225PBI21 pictures?
You can use Jotrin's intelligent search engine, or filter by VOLTA 192 category, or find it through Applied Micro Circuits Corporation (MACOM) Information page.
Q: Are the AMCC's S19225PBI21 price and stock displayed on the platform accurate?
The AMCC's inventory fluctuates greatly and cannot be updated in time, it will be updated periodically within 24 hours. After submitting an order for S19225PBI21, it is recommended to confirm the order with Jotrin salesperson or online customer service before payment.
Q: Can I place an order offline?
Yes. We accept offline orders.
We can provide order placement service. You only need to log in, click "My Orders" to enter the transaction management, and you will see the "Order Details" interface. After checking it, select all and click "Place Order". In addition, you can enjoy coupons or other selected gifts when placing orders online.
Q: What forms of payment can I use in Jotrin?
TT Bank, Paypal, Credit Card, Western Union, and Escrow is all acceptable.
Q: How is the shipping arranged and track my package?
Customers can choose industry-leading freight companies, including DHL, FedEx, UPS, TNT, and Registered Mail.
Once your order has been processed for shipment, our sales will send you an e-mail advising you of the shipping status and tracking number.
Note: It may take up to 24 hours before carriers will display tracking information. In normal conditions, Express delivery needs 3-5 days, Registered Mail needs 25-60 days.
Q: What is the process for returns or replacement of S19225PBI21?
All goods will implement Pre-Shipment Inspection (PSI), selected at random from all batches of your order to do a systematic inspection before arranging the shipment. If there is something wrong with the S19225PBI21 we delivered, we will accept the replacement or return of the S19225PBI21 only when all of the below conditions are fulfilled:
(1)Such as a deficiency in quantity, delivery of wrong items, and apparent external defects (breakage and rust, etc.), and we acknowledge such problems.
(2)We are informed of the defect described above within 90 days after the delivery of S19225PBI21.
(3)The S19225PBI21 is unused and only in the original unpacked packaging.
Two processes to return the products:
(1)Inform us within 90 days
(2)Obtain Requesting Return Authorizations
More details about return electronic components please see our Return & Change Policy.
Q: How to contact us and get support, such as S19225PBI21 datasheet pdf, S19225 pin diagram?
Need any After-Sales service, please feel free contact us: sales@jotrin.com

View All Newest Products from AMCC.