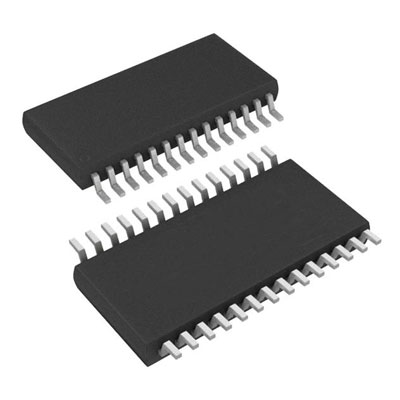 Each LED output can be off, on (no PWM control), set at its individual PWM controller value or at both individual and group PWM controller values. The LED output driver is programmed to be either open-drain with a 25 mA current sink capability at 5 V or totem-pole with a 25 mA sink, 10 mA source capability at 5 V. The PCA9635 operates with a supply voltage range of 2.3 V to 5.5 V and the outputs are 5.5 V tolerant. LEDs can be directly connected to the LED output (up to 25 mA, 5.5 V) or controlled with external drivers and a minimum amount of discrete components for larger current or higher voltage LEDs.

The PCA9635 is one of the first LED controller devices in a new Fast-mode Plus (Fm+) family. Fm+ devices offer higher frequency (up to 1 MHz) and more densely populated bus operation (up to 4000 pF).

The active LOW Output Enable input pin (OE) allows asynchronous control of the LED outputs and can be used to set all the outputs to a defined I²C-bus programmable logic state. The OE can also be used to externally PWM the outputs, which is useful when multiple devices need to be dimmed or blinked together using software control.

Software programmable LED Group and three Sub Call I²C-bus addresses allow all or defined groups of PCA9635 devices to respond to a common I²C-bus address, allowing, for example, all red LEDs to be turned on or off at the same time or marquee chasing effect, thus minimizing I²C-bus commands. Seven hardware address pins allow up to 126 devices on the same bus.

The Software Reset (SWRST) Call allows the master to perform a reset of the PCA9635 through the I²C-bus, identical to the Power-On Reset (POR) that initializes the registers to their default state causing the outputs to be set HIGH (LED off). This allows an easy and quick way to reconfigure all device registers to the same condition. 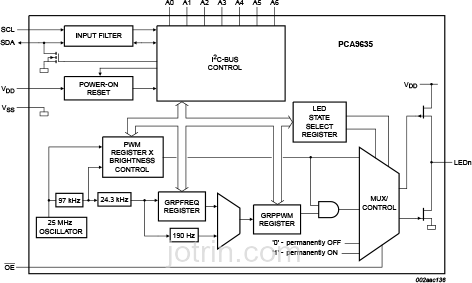