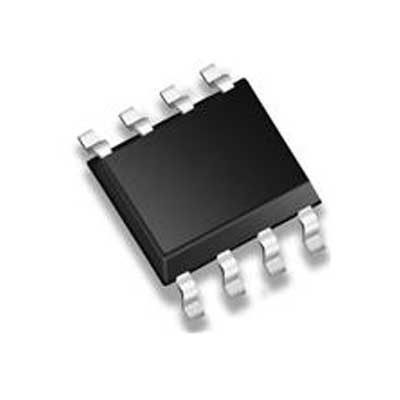 Programmable 4A USB Current-Limited Switches with Autoreset and Fault Blanking

The MAX1562/MAX1562H/MAX1563 single current-limited switches provide up to 4A to power up to eight USB ports. They operate from a 4V to 5.5V input supply and consume only 40μA of quiescent current when operating and only 3μA in shutdown. The MAX1562/MAX1562H/MAX1563s' autoreset feature latches the switch off if the output is shorted, thereby saving system power. When the short is removed, the switch is reactivated. A fault-blanking feature enables the circuit to ignore momentary faults, such as those caused when hot swapping a capacitive load, preventing false alarms to the host system. Fault blanking also prevents fault signals from being issued when the device powers up the load. The MAX1562/MAX1562H/MAX1563 provide several safety features to protect the USB port. Built-in thermal-overload protection turns off the switch when the die temperature exceeds +160°C. Accurate internal current-limiting circuitry protects the input supply against both overload and short-circuit conditions. An open-drain fault signal (FAULT) notifies the microprocessor when a thermal-overload, current-limit, undervoltage lockout (UVLO), or short-circuit fault occurs. The MAX1562ESA has an active-low ON, and the MAX1562H has an active-high ON enable input. The MAX1563 has a selectable active-high or active-low, logic-controlled enable. The current limit is programmed from 1A to 4A using a resistor. The MAX1562/MAX1562H are available in 8-pin SO packages and are pin-compatible upgrades to the MIC2545A/MIC2549A. The MAX1563 provides the same features and higher current performance in a smaller 12-pin (4mm x 4mm) Thin QFN package. These devices operate over an extended temperature range (-40°C to +85°C). An evaluation kit is available to speed designs. 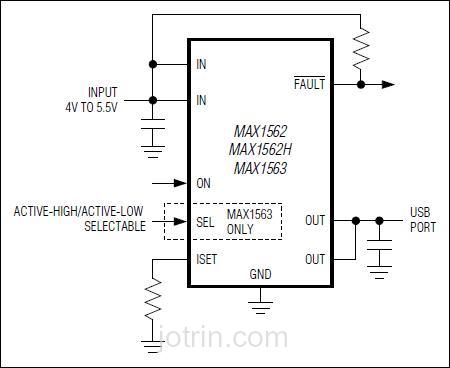