GENERAL DESCRIPTION
The Microchip LAN91C111I-NE is designed to facilitate the implementation of a third generation of Fast Ethernet connectivity solutions for embedded applications. For this third generation of products, flexibility and integration dominate the design requirements. The LAN91C111I-NE is a mixed signal Analog/Digital device that implements the MAC and PHY portion of the CSMA/CD protocol at 10 and 100 Mbps. The design will also minimize data throughput constraints utilizing a 32-bit, 16-bit or 8-bit bus Host interface in embedded applications. The total internal memory FIFO buffer size is 8 Kbytes, which is the total chip storage for transmit and receive operations.
The Microchip LAN91C111I-NE is software compatible with the LAN9000 family of products.
Memory management is handled using a patented optimized MMU (Memory Management Unit) architecture and a 32-bit wide internal data path. This I/O mapped architecture can sustain back-to- frame transmission and reception for superior data throughput and optimal performance. It also dynamically allocates buffer memory in an efficient buffer utilization scheme, reducing software tasks and relieving the host CPU from performing these housekeeping functions.
The Microchip LAN91C111I-NE provides a flexible slave interface for easy connectivity with industry-standard buses. The Bus Interface Unit (BIU) can handle synchronous as well as asynchronous transfers, with different signals being used for each one. Asynchronous bus support for ISA is supported even though ISA cannot sustain 100 Mbps traffic. Fast Ethernet data rates are attainable for ISA-based nodes on the basis of the aggregate traffic benefits.
Two different interfaces are supported on the network side. The first Interface is a standard Magnetics transmit/receive pair interfacing to 10/100Base-T utilizing the internal physical layer block. The second interface follows the MII (Media Independent Interface) specification standard, consisting of 4 bit wide data transfers at the nibble rate. This interface is applicable to 10 Mbps standard Ethernet or 100 Mbps Ethernet networks. Three of the LAN91C111’s pins are used to interface to the two-line MII serial management protocol.
The Microchip LAN91C111I-NE integrates IEEE 802.3 Physical Layer for twisted pair Ethernet applications. The PHY can be configured for either 100 Mbps (100Base-TX) or 10 Mbps (10Base-T) Ethernet operation. The Analog PHY block consists of a 4B5B/Manchester encoder/decoder, scrambler/de-scrambler, transmitter with wave shaping and output driver, twisted pair receiver with on chip equalizer and baseline wander correction, clock and data recovery, Auto-Negotiation, controller interface (MII), and serial port (MI). Internal output wave shaping circuitry and on-chip filters eliminate the need for external filters normally required in 100Base-TX and 10Base-T applications.
The LAN91C111I-NE can automatically configure itself for 100 or 10 Mbps and Full or Half Duplex operation with the on-chip Auto-Negotiation algorithm. The LAN91C111I-NE is ideal for media interfaces for embedded application desiring Ethernet connectivity as well as 100Base-TX/10Base-T adapter cards, motherboards, repeaters, switching hubs. The LAN91C111I-NE operates from a single 3.3V 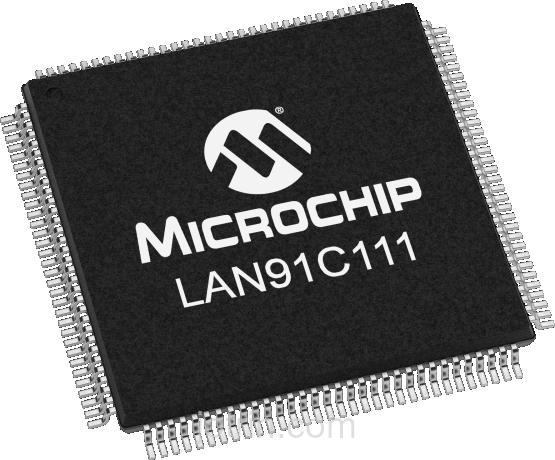 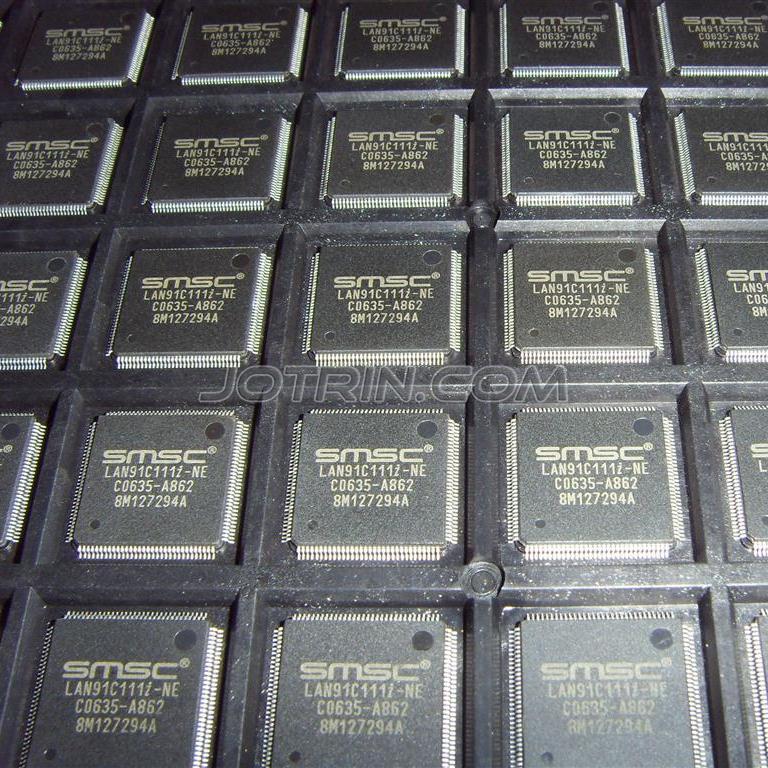 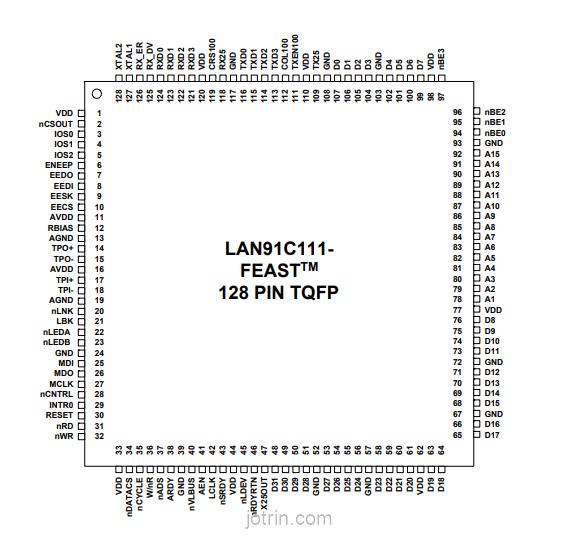 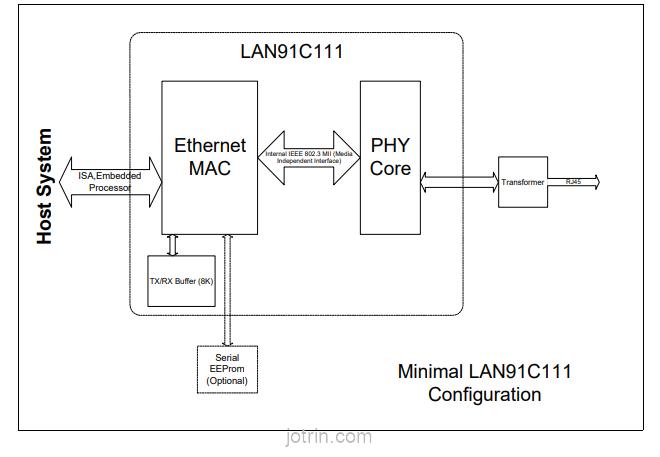 Q: How does Jotrin guarantee that LAN91C111I-NE is the original manufacturer or agent of MICROCHIP?
We have a professional business development department to strictly test and verify the qualifications of MICROCHIP original manufacturers and agents. All MICROCHIP suppliers must pass the qualification review before they can publish their LAN91C111I-NE devices; we pay more attention to the channels and quality of LAN91C111I-NE products than any other customer. We strictly implement supplier audits, so you can purchase with confidence.
Q: How to find the detailed information of LAN91C111I-NE chips? Including MICROCHIP original factory information, Ethernet ICs application, LAN91C111I-NE pictures?
You can use Jotrin's intelligent search engine, or filter by Ethernet Controller Products category, or find it through Microchip Technology, Inc Information page.
Q: Are the MICROCHIP's LAN91C111I-NE price and stock displayed on the platform accurate?
The MICROCHIP's inventory fluctuates greatly and cannot be updated in time, it will be updated periodically within 24 hours. After submitting an order for LAN91C111I-NE, it is recommended to confirm the order with Jotrin salesperson or online customer service before payment.
Q: Can I place an order offline?
Yes. We accept offline orders.
We can provide order placement service. You only need to log in, click "My Orders" to enter the transaction management, and you will see the "Order Details" interface. After checking it, select all and click "Place Order". In addition, you can enjoy coupons or other selected gifts when placing orders online.
Q: What forms of payment can I use in Jotrin?
TT Bank, Paypal, Credit Card, Western Union, and Escrow is all acceptable.
Q: How is the shipping arranged and track my package?
Customers can choose industry-leading freight companies, including DHL, FedEx, UPS, TNT, and Registered Mail.
Once your order has been processed for shipment, our sales will send you an e-mail advising you of the shipping status and tracking number.
Note: It may take up to 24 hours before carriers will display tracking information. In normal conditions, Express delivery needs 3-5 days, Registered Mail needs 25-60 days.
Q: What is the process for returns or replacement of LAN91C111I-NE?
All goods will implement Pre-Shipment Inspection (PSI), selected at random from all batches of your order to do a systematic inspection before arranging the shipment. If there is something wrong with the LAN91C111INE we delivered, we will accept the replacement or return of the LAN91C111I-NE only when all of the below conditions are fulfilled:
(1)Such as a deficiency in quantity, delivery of wrong items, and apparent external defects (breakage and rust, etc.), and we acknowledge such problems.
(2)We are informed of the defect described above within 90 days after the delivery of LAN91C111I-NE.
(3)The LAN91C111I-NE is unused and only in the original unpacked packaging.
Two processes to return the products:
(1)Inform us within 90 days
(2)Obtain Requesting Return Authorizations
More details about return electronic components please see our Return & Change Policy.
Q: How to contact us and get support, such as LAN91C111I-NE datasheet pdf, LAN91C111 pin diagram?
Need any After-Sales service, please feel free contact us: sales@jotrin.com