1 GENERAL DESCRIPTION The ISD3900 is a multi-message ChipCorder featuring digital compression, comprehensive memory management, and integrated analog/digital audio signal paths. The message management feature is designed to make message recording simple and address-free as well as make code development easier for playback-only applications. The ISD3900 utilizes winbond 25X/25Q series flash memory to provide non-volatile audio record/playback for a two-chip solution. Unlike other ChipCorder series, the ISD3900 provides an I's digital audio interface, faster digtal recording, higher sampling frequency, and a signal path with SNR equivalent to 12bit resolution.
The ISD3900 can take digital audio data via l'S or SPI interface. When I'S input is selected, it will replace the analog audio inputs and will support sample rates of 32,44.1 or 48 kHz depending upon clock configuration. When SPI interface is chosen, the sample rate of the audio data sent must be one of the ISD3900 supported sample rates.
The ISD3900 has built-in analog audio inputs, analog audio line driver, and speaker driver output The two analog audio inputs to the device are:(1) AUXIN has a fxed gain configured by SPI command, and(2) ANAINANAOUT has a fixed gain amplifier with the gain set by two external resistors.
ANAIN/ANAOUT can also be used as a microphone differential input (ANAIN/ANAOUT becomes MIC+/MIC-) in conjunction with an automatic gain control (AGC) circuit configured by SPI command.
Analog outputs are available in three forms:(1) AUXOUT is a single-ended volitage output;(2)
AUDOUT can be configured as either a single-ended voltage output or a single-ended current output;

(3) BTL(bridge-tied-load) is a diferential voltage output
FEATURES
· Extemal Memory. support winbond 25X/25Q SpiFlash.
o The addressing ability of ISD3900 is up to 128Mbit1, which is 64-minute recording time based on 8kHz/4bit ADPCM.
· Fast Digital Programming o Programming rate can go up to 1Mbits/second mainly limited by the flash memory write rate.
· Message Management o Perform address-free recording: The ISD3900 allocates memory for new recording requests and upon completion, returns a start address to the host via SPI interface o Store pre-recorded audio(Voice Prompts) using high quality digital compression o Use a simple index based command for playback oExecute pre-programmed macro scripts(Voice Macros) designed to control the configuration of the device and play back Voice Prompts sequences and message recordings.
Sample Rate oSeven record and playback sampling frequencies are available for a given master sample rate. For example, the record and playback sampling frequencies of 4,5.3,6.4,8,12.8,16
and 32kHz are available when the device is clocked at a 32kHz master sample rate.
o For I'S operation,32,44.1 and 48kHz master sample rates are available with record and Cplayback sampling frequencies scaling accordingly.
· Compression Algorithms 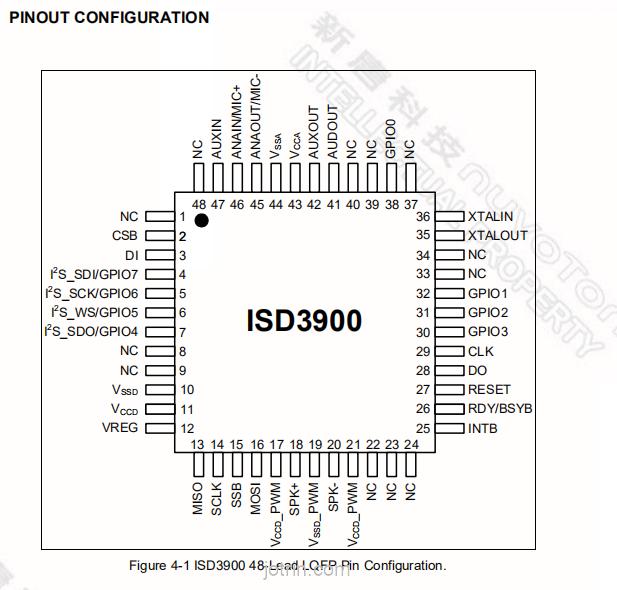 Q: How does Jotrin guarantee that ISD3900FYI is the original manufacturer or agent of NUVOTON?
We have a professional business development department to strictly test and verify the qualifications of NUVOTON original manufacturers and agents. All NUVOTON suppliers must pass the qualification review before they can publish their ISD3900FYI devices; we pay more attention to the channels and quality of ISD3900FYI products than any other customer. We strictly implement supplier audits, so you can purchase with confidence.
Q: How to find the detailed information of ISD3900FYI chips? Including NUVOTON original factory information, Voice Record and Playback application, ISD3900FYI pictures?
You can use Jotrin's intelligent search engine, or filter by Voice Record and Playback category, or find it through Nuvoton Technology Corporation Information page.
Q: Are the NUVOTON's ISD3900FYI price and stock displayed on the platform accurate?
The NUVOTON's inventory fluctuates greatly and cannot be updated in time, it will be updated periodically within 24 hours. After submitting an order for ISD3900FYI, it is recommended to confirm the order with Jotrin salesperson or online customer service before payment.
Q: Can I place an order offline?
Yes. We accept offline orders.
We can provide order placement service. You only need to log in, click "My Orders" to enter the transaction management, and you will see the "Order Details" interface. After checking it, select all and click "Place Order". In addition, you can enjoy coupons or other selected gifts when placing orders online.
Q: What forms of payment can I use in Jotrin?
TT Bank, Paypal, Credit Card, Western Union, and Escrow is all acceptable.
Q: How is the shipping arranged and track my package?
Customers can choose industry-leading freight companies, including DHL, FedEx, UPS, TNT, and Registered Mail.
Once your order has been processed for shipment, our sales will send you an e-mail advising you of the shipping status and tracking number.
Note: It may take up to 24 hours before carriers will display tracking information. In normal conditions, Express delivery needs 3-5 days, Registered Mail needs 25-60 days.
Q: What is the process for returns or replacement of ISD3900FYI?
All goods will implement Pre-Shipment Inspection (PSI), selected at random from all batches of your order to do a systematic inspection before arranging the shipment. If there is something wrong with the ISD3900FYI we delivered, we will accept the replacement or return of the ISD3900FYI only when all of the below conditions are fulfilled:
(1)Such as a deficiency in quantity, delivery of wrong items, and apparent external defects (breakage and rust, etc.), and we acknowledge such problems.
(2)We are informed of the defect described above within 90 days after the delivery of ISD3900FYI.
(3)The ISD3900FYI is unused and only in the original unpacked packaging.
Two processes to return the products:
(1)Inform us within 90 days
(2)Obtain Requesting Return Authorizations
More details about return electronic components please see our Return & Change Policy.
Q: How to contact us and get support, such as ISD3900FYI datasheet pdf, ISD3900FYI pin diagram?
Need any After-Sales service, please feel free contact us: sales@jotrin.com

The purpose of Xintang Technology is to bring innovative solutions to the semiconductor industry. The company was established in 2008, and in July of the same year, the company was officially launched to operate the division of Winbond Electronic Logic IC, and was officially listed on the Taiwan...

View All Newest Products from NUVOTON.