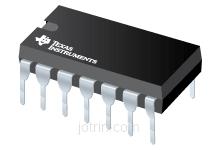 CD40117BNSRE4 is a dual 4-bit terminator that can be programmed by means of STROBE and DATA control bits to function as pull-up or pull-down resistors. The CD40117BNSRE4 can also be programmed to function as latches to terminate any open or unused CMOS logic when used with 3-state logic or during a power-down condition. Considerable savings in power and board space can be realized when this device is used to replace pull-up or pull-down resistors. When the STROBE is in the logic "1" state, the terminator functions as a pull-up resistor if the DATA input is a logic "1" or as a pull down resistor if the DATA input is a logic "0".