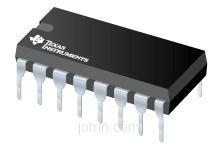 CD40110BEE4 is a dual-clocked up/down counter with a special preconditioning circuit that allows the counter to be clocked, via positive going inputs, up or down regardless of the state or timing (within 100 ns typ.) of the other clock line.

The clock signal is fed into the control logic and Johnson counter after it is preconditioned. The outputs of the Johnson counter (which include anti-lock gating to avoid being locked at an illegal state) are fed into a latch. This data can be fed directly to the decoder through the latch or can be strobed to hold a particular count while the Johnson counter continues to be clocked. The decoder feeds a seven-segment bipolar output driver which can source up to 25 mA to drive LEDs and other displays such as low-voltage fluorescent and incandescent lamps.

The CARRY and BORROW outputs can be tied directly to the clock-up and clock-down lines respectively of another CD40110BEE4 for easy cascading of several counters.

Meets all requirements of JEDEC Tentative Standard No. 13B, "Standard Specifications for Description of 'B' Series CMOS Devices".

Q: What are the advantages of buying from Jotrin?
Jotrin is your second procurement department of the electronic components. The platform has supported by over 1000 original factories and authorized agents, over 10 years of experience in the electronic components area. Jotrin is aiming to help these manufacturers, EMS, PCBA clients offer a whole BOM solution with the assistant of their professional BOM team and Intelligent BOM software. We can help you:
1. Do the cost down for your current regular orders.
2. Decrease your suppliers' management costs and suppliers' qty.
3. Improve your efficiency, we can offer the whole BOM one-stop supply chain service.

Q: How can Jotrin guarantee to be the original manufacturers or the agents?
We have a professional business development department to strictly examine and verify the qualifications of the original manufacturers and the agents. All the suppliers must pass the qualification examination before putting their materials on the shelves; We pay more attention to the channel and quality of products than any other customers, we are strict with supplier audit, you can rest assured that choice.
Q: What are the business hours of Jotrin?
Although we accept quotation requests and orders anytime 24 hours a day regardless of business days and hours, we provide quotations and process orders during business time.
Business Hours: Monday - Friday 9:00am - 9:00pm (GMT+8)
Q: Is the inventory and price seen on the platform accurate?
Inventory fluidity big, unable to update in time, it will be updated periodically within 24 hours. After placing the order, it is suggested to confirm the order with the supplier or the online customer service of Jotrin before paying.
Q: Can I place an order offline?
Yes. We accept offline orders.
You can contact our customer service representatives to help you customize your requirements.
If you'd like to submit your purchase orders via email, please send us a note to sales@jotrin.com. One of our customer service representatives will help you.
Q: What forms of payment can I use in Jotrin?
TT Bank, Western Union, Paypal, and Escrow is all acceptable.
Q: How is the shipping arranged?
Customers can choose industry-leading freight companies, including DHL, FedEx, UPS, TNT, and Registered Mail. No shipment handling charges be included.
Q: How can I track my package?
Once your order has been processed for shipment, our sales will send you an e-mail advising you of the shipping status of your order and its tracking number, if applicable. When the tracking numbers are present, you can click on the link and it will take you directly to the carriers' website so that you can track your order. Note: It may take up to 24 hours before carriers will display tracking information.
Q: When can I receive my package？
In normal conditions, Express delivery needs 3-5 days, Registered Mail needs 25-60 days.
Q: What is the process for returns or replacement?
All goods will implement Pre-Shipment Inspection (PSI), selected at random from all batches of your order to do a systematic inspection before arranging the shipment. If there is something wrong with the product we delivered, we will accept the replacement or return of the product only when all of the below conditions are fulfilled: (1)There are any problems with the product we delivered, such as a deficiency in quantity, delivery of wrong items, and apparent external defects (breakage and rust, etc.), and we acknowledge such problems.
(2)We are informed of the defect described above within 90 days after the delivery of the product.
(3)The product is unused and only in the original unpacked packaging.
Two processes to return the products:
(1)Inform us within 90 days
(2)Obtain Requesting Return Authorizations
More details about return electronic components please see our Return & Change Policy
Q: How to contact us and get support?
Need any After-Sales service, please feel free contact us: sales@jotrin.com