Published time : 2019-02-19 ATMEL sensors
The solution is mainly developed based on ATMEL ATTINY441-SSU. The ATTINY441-SSU has powerful functions and can control the operation of related devices.

The thermal element in the detector undergoes a physical change, thereby converting the temperature signal into an electrical signal and performing an alarm process.

ATtiny441 is a low-power CMOS 8-bit microcontrollers based on the AVR enhanced RISC architecture. By executing powerful instructions in a single clock cycle, the ATtiny441/841 achieves throughputs approaching 1 MIPS per MHz allowing the system designer to optimize power consumption versus processing speed.

The AVR core combines a rich instruction set with 32 general purpose working registers. All 32 registers are directly connected to the Arithmetic Logic Unit (ALU), allowing two independent registers to be accessed in a single instruction,executed in one clock cycle. The resulting architecture is compact and code efficient while achieving throughputs up to ten times faster than conventional CISC microcontrollers.

The block diagram of Fire detector based on ATMEL ATTINY441-SSU 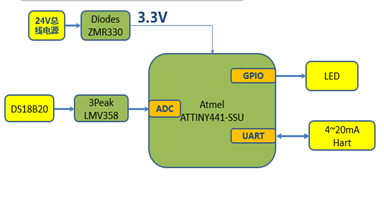 The core advantages of the application solution:

This solution can be used to: