Published time : 2018-09-14 Mouse computer
With the popularity of consumer computers, the way the mouse works has also made great progress.From the earliest mechanical wheel mouse to the current optical mouse, to the high-end laser mouse.

Since its birth in 1968, the mouse has evolved and evolved over the past 40 years.

With the popularity of consumer computers, the way the mouse works has also made great progress.

From the earliest mechanical wheel mouse to the current optical mouse, to the high-end laser mouse.

Every change for the mouse brings a sense of pleasure to the user. In addition, as people's requirements for office environment and operational convenience are increasing, the popularity of wireless mice has also been mentioned.

The functional definition and performance indicators

Components required for the solution: 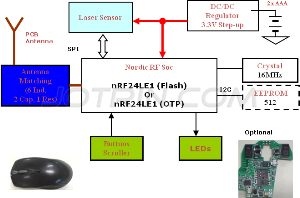 The overview of Wireless mouse

A wireless mouse is a mouse that is directly connected to the host without a cable. Generally, 27M, 2.4G, and Bluetooth technologies are used to implement wireless communication with the host.

The classification of Wireless mouse

Because the 27Mhz farthest effective transmission distance is only 6 feet (182.88cm), in order to prevent frequency interference in the case of poor transmission, some of the newer wireless mouse and keyboard products use a dual channel solution.

In such a case, the wireless keyboard and the mouse are not only prone to mutual interference, but also  the use of the dual channel signal is less prone to signal "crash".

In addition, because other wireless network devices rarely use 27Mhz frequencies, it is unlikely that such mouse and keyboard products will be interfered with by other wireless devices.

Although it has the advantages of mature technology, low cost and low risk of interference, the disadvantage of the 27Mhz band is obvious.


First of all, this type of mouse and keyboard product only supports one-way transmission, that is to say, only the transmitting end of the mouse is allowed to send a signal to the signal receiver and it cannot be "retrograde".

In addition, the 27MHz technology must work continuously due to the transmission rate, the power consumption is also relatively large.

The lower wireless security level and the shorter effective transmission distance are the unavoidable disadvantages of the 27Mhz frequency mouse and keyboard products.

Its advantage is to solve the shortcomings of 27Mhz power, short transmission distance, and similar products are prone to mutual interference.

Because the frequency used by this technology is 2.4-2.485GHz ISM wireless frequency band, which is free of charge for free use in most countries in the world. The popularity has cleared the biggest obstacles.